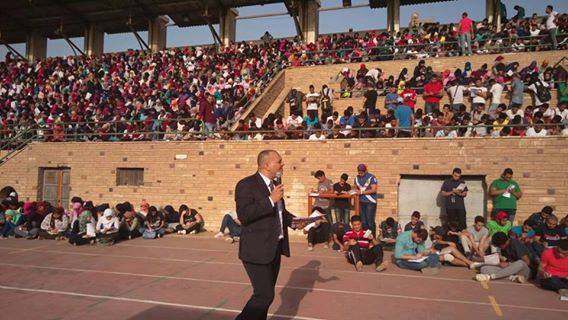 Believe it or not, this is not a football match and these are not loyal fans supporting their favourite team. This is actually a final review session of philosophy for thanaweya amma (secondary school) students.

Instead of gathering students into small groups in order to review the curriculum, one philosophy teacher gathered all of his students in a large stadium located in Faisal, Giza, and stood in the middle of the green area speaking to them all through a microphone.

The photos went viral on social media causing an uproar among people, especially after one of the students posted saying that this “class” costs them EGP 60 per hour. People accused the teacher of humiliating his students by teaching them in such informal conditions that lack familiarity.

“How do you expect students who are raised in an educational system like this to grow up and be effective and productive members of society,” one comment said.

Some comments showed support for the exam leaks made by the Facebook page ChaoMing stating, “If this is your education system, then [the government] should not be angry at the exams being leaked; the students are not learning anything both ways.”