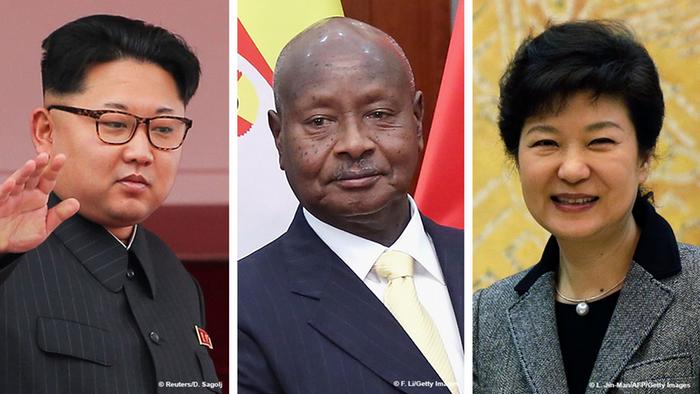 South Korea is waging a diplomatic campaign to wean nations in far-flung parts of the world off their alliances with North Korea. Julian Ryall reports from Tokyo.
South Korean President Park Geun-hye visited East Africa in late May and held talks with the leaders of Uganda, Ethiopia and Kenya. The details would have been worked out in advance, but Park walked away from a meeting with Yoweri Museveni, the Ugandan president, with an agreement that he would cut all military ties with North Korea.

Within days, the Ugandan government had asked around 60 North Korean military advisers and state security officials to leave the country.

It is not clear what South Korea has pledged to provide in return for this switch in Uganda’s allegiance, but a Ugandan military intelligence official visited Seoul in June, and the African nation’s defense minister is scheduled to attend the Seoul Defense Dialogue in September.

“The government is making concerted efforts to cut North Korea’s contacts to some of these rather remote parts of Africa, as well as Cuba,” said Rah Jong-yil, a former South Korean ambassador to London and Tokyo.

“And because of South Korea’s economic power, we have much more to offer than the North, which is appealing to a country like Cuba that is just beginning to open up and is very keen to access foreign capital,” he told DW.

Even before the most recent United Nations sanctions – imposed earlier this year after Pyongyang carried out its fourth underground nuclear test and the launch of a rocket – North Korea had very few international allies, but it sought to obtain as much as it could from those that were friendly. The money that it earned was presumably sunk into its nuclear weapons and missile programs.

“For African countries, the trade was primarily in weapons for hard currency or resources,” said Rah. “Those arms transactions had to be done undercover because of earlier sanctions, but the weapons that the North supplied are a major cause of the instabilities that have affected the region.”

Pyongyang also has a track record of providing military training to African regimes, including teaching martial arts to troops.

Another of Pyongyang’s allies in Africa is Zimbabwe, which also has a poor human rights record and, in Robert Mugabe, a long-serving dictator at the helm.

As recently as 2013, Zimbabwe signed an agreement to export yellowcake from its uranium mines in Kanyemba to North Korea. In return, Pyongyang agreed to provide weapons.

Zimbabwe’s notorious Fifth Brigade was trained by North Korean Special Forces in the 1980s but was disbanded over allegations of brutality and the murder of 20,000 civilians during its occupation of Matabeleland in 1988.

In the mid-1980s, Mugabe personally ordered that wild animals be sent to the North Korean capital as a gift. Two endangered rhinos died shortly after arriving in Pyongyang, while subsequent plans to ship giraffes, zebras and baby elephants to North Korea were only cancelled after international pressure was brought to bear.

Cuba appears to be the next target in South Korea’s campaign. Foreign Minister Yun Byung-se told a session of the National Assembly in Havana that he hoped to normalize relations between the two countries.

Havana has been a close ally of Pyongyang for many years; in August 2013, Panamanian officials stopped and boarded the North Korean cargo ship Chong Chon Gang shortly after it had left a Cuban port and found 240 tons of Cuban-made weapons, radar for missile systems, 15 aircraft engines, live munitions and two disassembled Mig-21 fighter aircraft.

“Historically, there was a rivalry between North and South over how many nations recognized their regimes, but that has long since passed and its alliances primarily became a way for Pyongyang to earn hard currency,” said Robert Dujarric, director of the Institute of Contemporary Asian Studies at the Tokyo campus of Temple University.

“North Korea has slowly been cut off from its sources of hard currency so selling low-tech weapons to Uganda was a good way of keeping the cash flowing,” said Dujarric. “And when one considers however many millions the Ugandans might have been paying them, to have that taken away is probably quite a significant blow to a poor nation like North Korea.

“South Korea is really trying to hit the North where it hurts and they’re almost certainly telling these countries that South Korea has more money, more trade to offer and is not an international pariah, and in that way they are ticking Pyongyang’s allies off one by one,” he said.

North Korea remains defiant, however, with state media this week issuing a statement condemning “the foolish moves of the US to block economic exchange and cooperation between the DPRK and African countries.”

Clearly seeing Washington’s hand behind Seoul’s diplomatic maneuvers, the Korea Central News Agency said the campaign is “No more than a clumsy trick that the US seeks to tarnish the image of the DPRK and sow discord between the DPRK and African countries through all sorts of paradoxes and estrangement moves.”

In a parting shot, the North Koreans claimed their advisers had only left Uganda because the contract had expired. For the US to say otherwise, state-run media said, “is indeed ridiculous.”

Who pays for Germany’s nuclear phase-out?