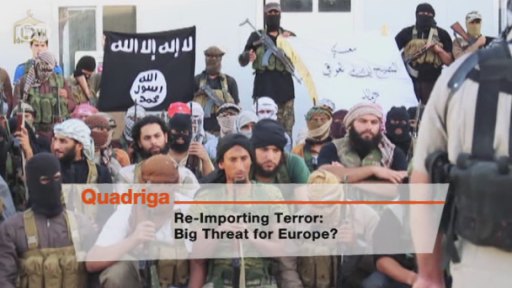 Hundreds of young people choose to go to Syria, despite their vastly more comfortable lives in Europe. But why does “Islamic State” attract so many Europeans? Radicalization expert Maarten van de Donk explains.
DW: What prompts young people to join fundamentalist groups?

Maarten van de Donk: One of the most important reasons is that, very often, people want to flee from their current situation. Sometimes it is because they feel discriminated against, or they feel they are not being taken seriously.

Quite often people don’t see any opportunities here [in Europe], but they see opportunities in Syria. Another group is those who are very ideological, religiously driven. These are people who are either very deep into Islam or into solidarity among Islamic people.

And finally, we have the thrill seekers, who want to have an adventure. They think they can go to Syria and fight, that they will have a luxury bed to sleep in every night and a lot of women around them.

Is there any particular ethnic group in Europe, which you think is most prone to radicalization?

It differs from country to country. It depends on the minority groups and the country’s migration history. For example, if you see Austria’s foreign fighters, these are people who came from Chechnya or from the former Yugoslav republic. When you look at Belgium and France, we see Moroccans and Algerians. In Holland, it’s mostly Moroccan and when you look at the British situation, you would find a lot of Pakistanis and Afghans.

Do recruiters for organizations like the “Islamic State” look for a certain stereotype when they search for people to join them?

Yes, they use techniques in that they look for vulnerable people or at least people who want to listen to them. At this moment, they are targeting people who are dissatisfied with Western society for various reasons: like being unemployed, feeling scapegoated or discriminated against. There they find very fertile soil for their messages.

They mostly look for males who want to fight, but they also look for young women. Nowadays we also find them looking for people for propaganda.

How do events unfold once a person is introduced into a radical group?

Very often, people already know someone else, also through the internet, and they are included in a group that is radicalizing. Some of those will leave for Syria or at least make an attempt. They mostly travel via Turkey or Lebanon and once they get there, the males are usually sent to a house to be trained for further combat. The next steps follow depending on the success of the training.

How many of these people come back, and why?

It’s getting more difficult to come back, by the way. The IS is really strict about not letting people desert. We have seen that when people came back before, it was because they’d done their duty there, their time was over.

Sometimes it also has to do with very practical things. We have had examples of people who stayed there for three months in a row and came back because otherwise their tourist visa to Turkey would become invalid. Sometimes people are hurt and need some major medical treatment. And we’ve also had people who came back because of disillusionment, because they didn’t feel at home there. A lack of Western standards of comfort is also a factor for a lot of people.

We don’t have a lot of proof for the “Islamic State” because it’s been in existence only since 2014, but we know from earlier experiences that some people will stay radicalized, at least mentally.

They might get into something else or return to Syria one day.

Some people go back to their normal lives.

Some of them come back with post-traumatic disorders and live a marginalized life afterwards.

And finally, we have people who come back and use the skills they learned in Syria for criminal purposes. For example, people who were good with weapons have a high tendency towards violence when they return.

Maarten van de Donk is an expert focusing on terror in Germany. He is part of the Netherlands-based Radicalization Awareness Network, a working group set up by the European Commission to counter violent radicalization.

IS shows alleged footage of downed Russian plane in Sinai