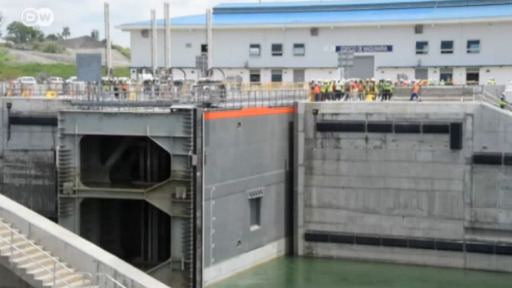 The crisis surrounding the Panama Papers has severely damaged the reputation of the Central American country. Now, the ceremony for the expansion of the Panama Canal is aiming to finally put that crisis to rest.
For the Europeans, it’s an extremely favorable deal. The consortium Grupo Unidos por el Canal (GUPC) ponied up $5 billion (4.4 billion euros) for the expansion of the Panama Canal. The technically demanding work was carried out by Sacyr, a company from Spain, Impregilo from Italy and Jan de Nul from Belgium. They worked together with a local partner called CUSA.

The billion-dollar construction project, built to let the next generation of giant tankers and container ships pass from the Atlantic to the Pacific and back with the help of massive locks, will be officially opened on Sunday. For the global shipping industry, it’s the beginning of a new era for one of the world’s most important trading routes. The canal is readying itself for the challenges of the future.

More than 70 state leaders have RSVP’d for this Sunday’s festivities, according to local media. The small Central American country is hoping the renovations will help to put the controversy over the Panama Papers behind it. Many people there feel like the attention was undeserved, because now Panama has been stigmatized.

“No matter where you go, this topic comes up,” Eduarda Machado, a stewardess for a Latin American airline, told DW. For a few weeks, she left her lapel pin with the Panamanian flag at home, though meanwhile she’s begun wearing it again proudly.

“I hope that things will soon go back to the way they were. Back then, people asked me about two things more than anything: the Panama Canal and Panama hats.”

“Our customers are the ships”

Manuel Benítez, the deputy administrator of the Panama Canal Authority, sees things a bit more pragmatically. “We have met the challenges of the future. We have to take technical development into consideration, which has allowed for even bigger ships with more freight. Our customers are the ships,” he said in an interview with DW.

From Monday on, around 100 ships of the so-called “Post-Panamax Class,” which until now have had to sail around Cape Horn off Chile’s southernmost coast, can now pass through the new and expanded Panama Canal with their 14,000 containers. This will flush millions into the pockets of the ACP – and thus the Panamanian state. The Panama Canal is and remains the most important economic artery in this small country.

The Panama Papers have disappeared from the headlines, and the Panamanian government has bowed to pressure from the international community to force a handful of law firms like Mossack Fonseca, which helped found thousands of shell companies for wealthy clients to stash their money away from the prying eyes of tax authorities around the world, reform their business models.

China wants a canal too

The expansion of the Panama Canal is much more important for the future of the country, as it is meant to secure Panama’s financial future. After all, an even bigger infrastructure project is currently in the works. Nicaragua is looking to build a more massive Nicaragua Canal with the help of a Chinese consortium. It’s supposed to be longer and wider – and in direct competition with the Panama Canal.

Behind the Nicaraguans’ ambitions lie the interests of the world’s great powers. Countless people may have lost their lives during the construction of the Panama Canal, but it has enjoyed the status of being one of the world’s most important Western trade routes for years. It is controlled – and monitored with vigilance – by the United States. But now China wants to secure its own trade route, the Nicaragua Canal, in order to ensure geopolitical events do not interrupt its connection to the markets.

Panama agrees to cooperate with France over ‘Panama Papers’