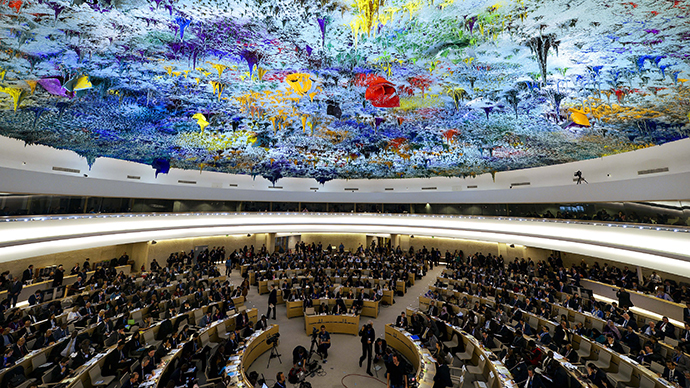 The local non-governmental organization (NGO) of Maat for Peace and Development called on the Egyptian government to honour its commitments to the human rights stated in the International Covenant on Civil and Political Rights (ICCPR) adopted by the United Nations (UN) in 1966.

This comes as Egypt’s Ministry of Foreign Affairs announced Thursday that an Egyptian diplomat, Ahmed Fathallah, won a seat on the UN Human Rights Committee.

In rejoicing, the Ministry of Foreign Affairs used the victory as an indicator of success in human rights, as spokesperson Ahmed Abu Zaid spoke Thursday of a strong message sent to all “sceptics that condemn the status of human rights in Egypt”.

However, one day prior to the elections, Egypt was criticised over the deterioration of human rights conditions during the general debate of the Human Rights Council’s 32nd session in Geneva.

Statements made on Egypt by the US and UK delegations shed light on a number of issues, in particular state restrictions on civil society and freedom of expression, resulting in the arrest of peaceful political dissidents.

The US called for more “accountability and avenues for peaceful dissent,” while the UK condemned reports of “torture and enforced disappearance,” demanding the “release of political detainees, ending the use of pre-trial detention beyond its legal limits, and allowing NGOs to operate freely”.

Meanwhile, Maat reminded of Egypt’s international obligations and promises it made during the Human Rights Council’s Universal Periodic Review of March 2015. “We urge the Egyptian legislative and executive authorities to review and update a number of laws and practices,” Maat said in a statement on Saturday.

It mainly listed four legislations that need reform. The first one referred to the crime of torture, which needs to be defined according to international standards, and its accountability needs to be clarified in the related laws.

Second, Maat called for the improvement of laws organising the work of civil society, taking into account both international principles and the Egyptian Constitution. An infamous case known as the “NGOs foreign funding” case had closed down many foreign NGOs and prosecuted their workers in 2011, as the case was recently reopened with accusations directed at local civil society workers for illicitly receiving foreign funds.

Maat was one of those recently accused, despite years of operation, as well as strong activity during the observation of Egyptian parliamentary elections in 2015, which included the hosting of the COMESA observers.

Thirdly, the NGO mentioned needed legislation to implement guarantees of freedom of belief and religious practices, as well as related anti-discrimination laws, and the issuing of a unified law on the construction of houses of worship, as stated in the Constitution.

This comes as the issue of religious freedom sparked strong debates, especially surrounding the law on contempt of religion, under which several intellectuals have received prison terms, and which limits the scope of freedom of religion and expression.

Finally, Maat highlighted the need to change laws regarding freedom of expression and peaceful assembly, which it said “should not restrict freedom”.

After more than three years of imprisonment facing young political dissidents under the controversial Protest Law of November 2013, the Egyptian government announced its intention to amend the law, in response to demands of some civil society factions.

But during Wednesday’s debate at the Human Rights Council, Egypt used its right of reply to claims made by other countries regarding the status of human rights. It rejected attempts to interfere with its rules regulating NGOs, and denied any claims of enforced disappearance.

Addressing one recent controversial case that ignited calls by European leaders for Egypt to improve its human rights records, the Human Rights Council said in an official statement: “regarding the investigation into the murder of Giulio Regeni, Egypt [said it] was in full cooperation with its Italian counterparts.”