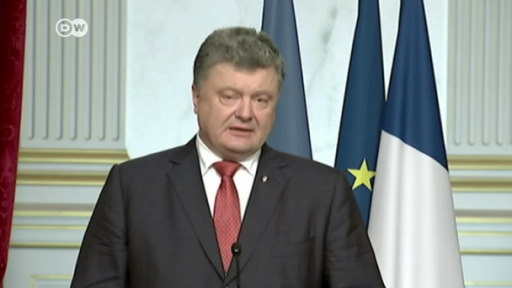 Russian President Vladimir Putin has met Chinese leaders in Beijing to push investment cooperation. A number of contracts for infrastructure, trade and innovation are being signed.
On his current visit to China, Russian President Vladimir Putin stressed the strength of economic ties between the two countries in a statement Saturday. The Chinese state news agency Xinhua reported that some 30 infrastructure, trade, technology and innovation contracts would be signed during Putin’s visit.

Putin said that Russia maintains an “all-embracing and strategic partnership” with China. The visit comes amid a drop in trade and a sense of increasing mistrust between the neighbors.

Although he said that Russia and China were cooperating internationally in areas such as culture and education, Putin pointed out that, “in one way or another, everything has an economic base.”

Although bilateral trade between both countries has slowed and a number of ambitious projects have failed to materialize, the leaders praised the success of the strategic partnership. Some observers see Russian anxiety about China’s growing power and their tough negotiating terms as the reason for slow progress. The underlying motivation of the partnership is widely thought to be an attempt to counter US global dominance.

Putin said, “I’m sure our countries can reach a bigger success in all areas in trade, investment, agriculture, energy, and of course high-tech, which is a priority for us.”

For his part, Xi said that the countries “should promote widely the idea of being friends forever.”

Russia has more aggressively sought to deepen ties with China since the United States and the European Union imposed strict sanctions on the country following its March, 2014, annexation of Ukraine’s Crimea. That also resulted in Russia being expelled from the G8 group of industrialized nations.

Investment deals in the pipeline

Putin signed a number of investment deals with China in May, 2014. Among them was a massive 30-year natural gas contract valued at $400 billion (360 billion euros). The move was a Russian attempt to prove to the world that it was not dependent on the West for its financial survival.

A friend in need

China has also said that it will offer Russia loans to complete an ambitious high-speed rail project between Moscow and the Volga river city of Kazan.

Russia’s uncertain economic situation, however, has put a great many deals on hold.

Western sanctions and low global oil prices have led to a sharp devaluation of the ruble. This, has in turn resulted in a sharp decline in bilateral trade, which has dropped from some $100 billion in 2014, to just $60 billion last year. Two-thirds of all Russian exports to China are in the energy sector.

Russians living and working near the country’s far-eastern border with China have long been concerned about the threat of encroachment. These worries were not eased by the Kremlin’s decision to hand over large swaths of land along its 4,200 kilometer (2,600 mile) border with China in a demarcation agreement in 2005. Despite overtones of peaceful cooperation there is still much mistrust.

Another project that has fuelled such feelings is Beijing’s Silk Road Economic Belt with which they seek to encourage infrastructure development in Central Asia. The region was formerly under Soviet control and Russia still thinks of it as its own home turf. Although China insists that it will coordinate the project with the Russian-backed Eurasian Economic Union, it has nevertheless penned a number of bilateral agreements with EU members such as Kazakhstan.

One area in which Russia and China have been maintaining close ties is that of the military sector. The two countries have conducted a number of joint war games, as well as signing missile defense contracts. Russian weapons exports, which were at their highest levels in the 1990s before tailing off significantly in the decade thereafter, have recently rebounded.

US accuses Russian warship of ‘aggressive’ approaches in Mediterranean

How far will Taiwan drift from China?

Will the Abe-Putin meeting settle their nations’ island dispute?