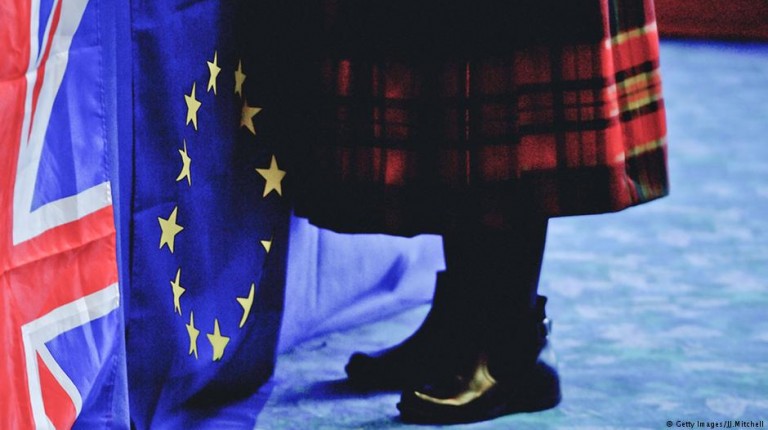 First Minister of Scotland, Nicola Sturgeon has said her semi-autonomous administration would seek “immediate discussions” with EU nations and institutions to ensure that Scotland could remain in the bloc despite the UK-wide vote to leave.

“(We will) explore possible options to protect Scotland’s place in the EU,” she said after meeting with her Cabinet in Edinburgh on Saturday morning. She added that a new referendum on Scottish independence from the United Kingdom was “very much on the table.”

“Cabinet agreed that we will seek to enter into immediate discussions with the EU institutions and other EU member states to explore all possible options to protect Scotland’s place in the EU,” Sturgeon reported after the meeting. She added: “Over the next few days I will establish an advisory panel comprising a range of experts who can advise me and the Scottish Government on a number of important matters: legal, financial and diplomatic.”

Her announcement came after 62 per cent of voters in Scotland voted Remain in the EU referendum last Thursday.

Sturgeon confirmed her government would begin to draw up the legislation that could see a fresh vote on Scottish independence from the rest of the UK take place within the next two years.

Scotland voted in 2014 to remain a part of the UK but that decision was seen by many as being conditional on the UK remaining in the EU.

After a cabinet meeting at Bute House, Sturgeon said: “We are determined to act decisively but in a way that builds unity across Scotland about the way forward. “As I said yesterday, a second independence referendum is clearly an option that requires to be on the table and is very much on the table.

“To ensure that that option is a deliverable one within the required timetable, steps will be taken now to ensure that the necessary legislation is in place. Cabinet this morning formally agreed that work,” the Scottish Nationalist Party (SNP) leader said.

By early Saturday afternoon an online petition, started on Friday morning by William Oliver Healey, had attracted more than 1,500,000 signatures – more than the difference between the “Remain” and “Leave” votes at 1,269,501.

In light of the result on Friday which saw 52 percent of the UK vote in favor of leaving the EU, the online campaign attracted so much traffic that the entire website crashed.

The 1.5 million signatories are calling for an alteration in legislation, stipulating that referendums on the EU with a majority under 60 per cent and turnout under 75 per cent must be held again.

Posted on the UK’s official parliament petitions website, the petition states: “We the undersigned call upon HM Government to implement a rule that if the Remain or Leave vote is less than 60 per cent based a turnout less than 75 per cent there should be another referendum.”

Having already crossed the required threshold of 100,000 signatures, the petition must now be considered for a parliamentary debate. Even if the demand is debated, it wasn’t immediately clear, however, whether such a change in law could be implemented retrospectively.

On Saturday the six founding member-states of the EU met in Berlin to discuss the next step in the UK’s exit from the bloc. The hastily arranged summit gathered the top diplomats of France, Italy, Netherlands, Belgium and Luxembourg, with Germany’s Steinmeier acting as host.

Steinmeier urged London to start the separation process “as soon as possible to avoid a prolonged deadlock,” which could bring financial and political insecurity.

“The people have spoken and we need to implement this decision,” Luxembourg Foreign Minister Jean Asselborn said.

British Prime Minister David Cameron announced within hours of the “Brexit” result on Friday that the UK would have a new prime minister by October.

French Foreign Minister Jean-Marc Ayrault said on Saturday, however, that Cameron had set the referendum in motion and “now needs to live with the consequences,” adding that a new PM must be appointed not in a matter of months but days.

British Commissioner for Financial Stability, Financial Services and Capital Markets Union Jonathan Hill also stepped down on Saturday, saying he was disappointed that the UK had decided not to “play a role in arguing for an outward-looking, flexible, competitive, free trade Europe.”

“Like many people here and in the UK, I am obviously very disappointed about the result of the referendum,” the Hill said in a statement.

“I wanted it to end differently,” Hill said. “But the British people took a different decision, and that is the way that democracy works.”

President of the European Juncker said he’s wanted Hill to remain in charge of the EU’s financial services, “as a sign of my confidence in the United Kingdom’s membership of the European Union.”

“To my great regret, this situation is now changing.” Juncker said.

Hill’s responsibilities will now be transferred to Valdis Dombrovskis, European commissioner from Latvia.

How the UK could turn the Brexit ship around

Egyptian Exchange at the mercy of Brexit repercussions