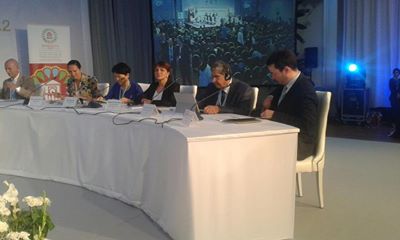 During  preparatory meetings for the COP22 in Marrakesh, Minister of Environment Khaled Fahmy once again insisted on adequate adaptation measures for the African continent.

On Thursday and Friday, hundreds of government officials and multidisciplinary personnel from around the world  met in Morocco to prepare for the upcoming 22nd session of the Conference of the Parties.

The forum was aimed at preparing climate action plans by providing opportunities for discussion among partnering coalitions ahead of the COP22.

Several sections in the COP21 agreement state there should be shared responsibility in  achieving the 2 degree target. This is represented in the creation of the Green Climate Fund and the Intended Nationally Determined Contributions (INDC).

Despite global momentum to improve climate change settings worldwide, the submitted INDCs indicate worldwide average temperatures could increase to 2.7 or even 3 degrees by 2100, instead of staying well below the 2 degree limit agreed upon in Paris, according to the UNFCCC synthesis report.

Since the beginning of the COP21 negotiations, Egypt has been advocating for adaptation measures, as well as placing responsibility on developed countries. This is attributed  to the fact that, according to government officials, Egypt is vulnerable to climate change effects. Throughout 2015, hundreds of people died and others were displaced due to unprecedented weather conditions.

Egypt’s efforts seem ineffectual for the moment, as several obstacles still lie ahead. These obstacles are not only related to  foreign funding, but increasingly, to local endeavours.

Egypt  was ranked the number one polluting country in the 2016 Pollution Index chart. The chart studied  pollution in the form of light, air, noise, littering, thermal, water, visual, plastic, as well as radioactive and soil contamination across 99 countries.

The Egypt INDC was also widely criticised for its lack of definitive data and figures.

Amena Sharaf, an environmental researcher at ECESR, previously told Daily News Egypt, “The Egypt INDC was broad and not detailed. It also did not mention any plans for expanding the use of fossil fuels and coal in the new energy mix.”