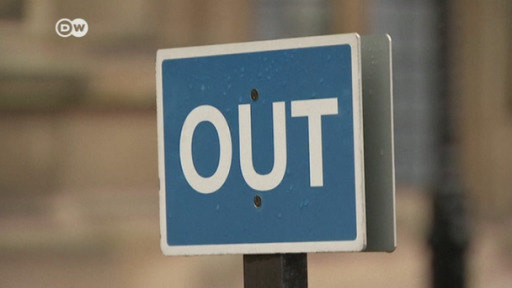 European shares have continued their slide, after Britain’s decision to leave the EU shocked financial markets on Friday, sending the British pound to its lowest level in more than 30 years.
European shares slumped further on Monday weighed down by uncertainty over Britain’s EU exit and ignoring reassurances by Britain’s finance minister George Osborne that the UK economy was fundamentally strong.

Shares in banks, airlines and property companies plunged on the London stock exchange as investors singled out the three sectors as being the most vulnerable to Britain’s decision to leave the EU.

Shares in budget airline EasyJet fell 16 percent after issuing a profit warning. Trading in Royal Bank of Scotland (RBS) and Barclays shares was even halted in London on volatility after their share prices continued to crater. RBS was temporarily halted after falling 14.2 percent, while Barclays was down 11.5 percent.

Analysts agreed that the fallout from Britain’s EU referendum would continue to ripple through markets throughout the week.

Lex Van Dam, hedge fund manager at Hampstead Capital, said the Brexit decision has taken markets by total surprise. “I would remain on the sidelines – no reason to step in yet,” he told the news agency Reuters.

But Nick Stamenkovic from RIA Capital markets thinks the UK stock market are “relatively stable” in view of the momentous decision, adding that reassuring comments about the British economy from Finance Minister George Osborne supported stocks.

On Monday, Osborne sought to calm markets after the country’s shock vote to leave the EU wiped $2.1 trillion off market valuations on Friday and sent the pound collapsing to a 31-year low against the dollar. He said Britain’s economy was “as strong as could be” to deal with the fallout of Thursday’s Brexit vote.

However, the British currency remained vulnerable particularly against the dollar as investor continued to rush into safe-haven assets.

Traders believe price swings are likely remain extreme given the lack of clarity on who runs the British government, renewed prospect of a Scottish secession, and doubts about the EU’s ability to contain calls by anti-EU parties across the continent.

Moreover, investors on Monday began pricing in a chance of a rate cut with some analysts expecting the Bank of England to consider quantitative easing to cushion the economy.

“The overnight indexed swap market is currently pricing 38 basis points of cuts from the BoE over one-year time horizon,” Petr Krpata, currency strategist at ING, told the news agency AFP. “While we deem sterling as undervalued at these levels, the mixture of political uncertainty, flagging growth and concerns about the current account deficit should keep a lid on sterling during the weeks and months ahead and prevent any meaningful or long lasting recovery,” he added.

The euro was also under pressure, pulled down by sterling, as Brexit clouded the future of the European Union. Safe-haven currencies like the yen and the Swiss franc extended gains, much to the discomfiture of the Japanese and Swiss central banks.