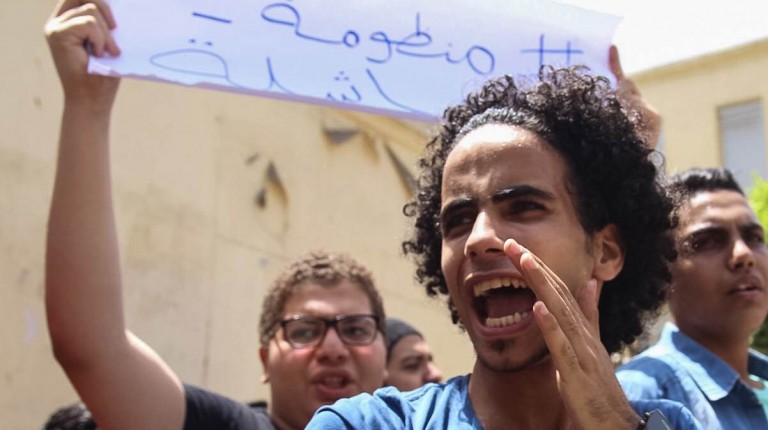 Security forces dispersed a protest staged by hundreds of thanaweya amma secondary school students on Monday morning at the headquarters of the Ministry of Education, calling for the minister’s immediate dismissal after a series of exam leaks.

The protest in Cairo’s downtown, that lasted more than five hours, criticised the ministry’s failure in securing thanaweya amma exams. There were a number of other protests staged by students on Monday, including Assiut, Alesandria, and Seuz.

Since the beginning of the exam season in early June, all exams have been leaked via social media, prior to or during the exams.

The protesters chanted against the ministry’s latest decision on Sunday to cancel part of the mathematics exam, after reports of online leaks. However, this decision comes after students had already sat for the exam earlier in the morning.

Students marched towards parliament while a number of high-ranking police officers repeatedly tried to persuade students to stop the demonstration, telling them that their demands had been relayed to the presidency. However, these persuasion attempts failed.

“I will not re-enroll in any exam that was leaked. It is not my problem. What happened is a clear sign of failure from the Ministry of Education, and postponing exams is not acceptable. We and our families are fed up with the ministry’s current policies,” Ahmed Mohamed, one of the students participating in the protest, told Daily News Egypt on Monday.

He added that the current demands include the dismissal of the current minister of education, the suspension of exam cancellations, repetition, and postponement, and changing the assortment system of university applications. Protesters want the eligibility criteria for entering universities to be based on skills, not secondary stage grades. Exams are already taking place in Ramadan, and it is very hard for students to restudy, Mohamed said.

Meanwhile, Ahmed Hamza, an Egyptian-Lebanese secondary school student, expressed his astonishment of the current thanaweya amma exams’ system in Egypt, stating that the Ministry of Education in Egypt has no plan or ability to manage crises.

“I came here with my Egyptian father to conclude the secondary stage at school, but I  could not adapt to Egypt’s education system. Schools are not being attended, and all students forcibly resort to private tutors and pay a lot of money for private lessons,” he explained.

Currently, Hamza wishes he could continue his secondary education in Lebanon. However, this is not possible at the moment, given that he has to finish all exams he had enrolled for in Egypt.

“I have to wait until I finish all exams, including those postponed and cancelled due to the leaks. It is not my fault. I was supposed to finish my exams this week,” he said.

In response to the massive student protests, Prime Minister Sherif Ismail met with the minister of education to discuss the ministry’s strategies to face exam leakage, according to an official statement issued by the cabinet on Monday.

“The decision to repeat some exams intends to ensure equal opportunity among thanaweya amma students and to not waste the efforts of those who had studied hard throughout the year,” Ismail said in the statement.

Later that day, as the protesting students headed to the iconic Tahrir Square, security forces used tear gas to disperse the protests, leading to minor clashes and chasing of students in the neighbouring streets.

Concerning the thermodynamics exam, the statement noted that it was leaked seven hours prior to the actual exam, so it had to be repeated in order to be fair.

Following the leak of the Arabic language exam, the Ministry of Education declared it had imposed strict measures on the transportation of the exams, and had also prepared alternative questions in case of a leak, according to Ahmed Adel, one of the participating students in the protest.

“The Ministry of Education is fully aware of the issue, which is why officials from the ministry are responsible,” Adel said.

The parents of many thanaweya amma students also joined the protest, calling for alternative solutions to the crisis.

“We do not care about the identity of the one responsible. What angers us is the absence of openness and transparency by the minister of education,” said Amr Ahmed, one the students’ parents who participated in the protest.

Transparency and openness are important factors in any successful policy of any minister or official. The minister should clearly explain the crisis in the media, so that the Egyptians become aware of its details and how the ministry is planning to tackle it, he continued.

Ahmed stated that the education system in Egypt is in dire need of comprehensive reconstructive operations and a reshuffle. These operations can be implemented by putting teachers through a qualification process, and also providing proper income and status for teachers in Egypt, he explained.

A number of parents decided to unanimously sue the minister of education.

“I asked a number of parents to sign for filing a case against Minister El-Helaly El-Sherbini, in an effort to suspend his recent decisions to cancel and postpone some leaked exams. The process of filing the case will start on Tuesday,” Teriz Nazmi, one of the parents, told Daily News Egypt on Monday.

She stated that the Ministry of Education bears full responsibility of the exam leakages. The ministry is trying to punish students for a mistake that happened thanks to the ministry’s bad planning, and the minister’s failure to adopt alternative ways to avoid the crisis, such as printing exams in army-affiliated publishing corporations, she noted.

The ministry had also decided to postpone the exam of several other subjects, including geology, history, mathematics, and geometry.

In Cartoon: Ministry of Education and Shaoming