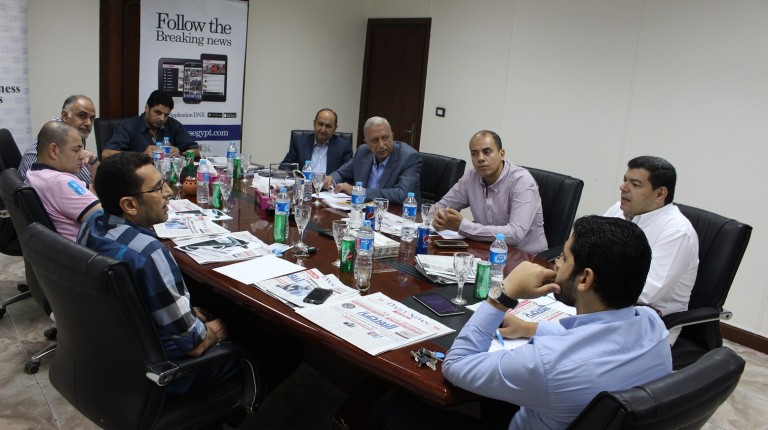 Business News, the organiser of the annual Egypt Automotive summit, held a preparatory meeting for its third automotive summit scheduled for December.

The meeting was attended by a number of key officials in the automotive industry. Among those attending were Business News Chairperson Mostafa Sakr, General Secretary of the Engineering Export Council of Egypt Amr Nassar, and the Executive Manager of the Egyptian Automobile Manufacturers Association (EAMA) Husein Mostafa. Also in attendance were important officials from a number automotive companies operating in Egypt.

Sakr said that conversations within the automotive sector at the time should revolve around what the government’s plans and strategy are for the sector.

For a while, we have been contemplating about when a strategy will be issued, said Sakr, who added that talking about the automotive sector without a strategy is useless.

Sakr said that the Ministry of Industry has not clearly announced any details about the strategy or steps being taken by the government towards the automotive sector.

Sales Manager at Fiat Chrysler Automobiles Emad El-Shorbagy agreed that the steps being taken are only individual steps, and a real change can only be done through establishing an entity like the Egyptian Automotive Council. Such an entity can represent the sector to the government during negotiations, said El-Shorbagy.

For the time being, we are experiencing a conflict in ideas between different entities related to the automotive sector, said El-Shorbagy.

Egyptian Automobile Manufacturers Association (EAMA) Executive Manager Husein Mostafa said the automotive industry strategy came from the office of the prime minister to be presented to parliament after going through the State Council. However, it was put at the end of the list of parliament’s priorities.

General Secretary of the Engineering Export Council of Egypt Amr Nassar noted that the government has yet to decide on its position on the strategy for the automotive industry.

According to Nassar, the government is currently looking at whether the strategy should be issued through the Suez Canal Economic Zone Authority under the chairmanship of Ahmed Darwish. The strategy would act as a law that would regulate investment in the automotive sector through the economic zone, which was established for manufacturing cars and their components in the Suez Canal area.

Nassar added that there are two international firms designated to study the economic zone in the Suez Canal area in order to look into the incentives and how to present them to investors. This is not only for the automotive sector, but includes all the industrial and logistic sectors.

There are two scenarios on which the strategy can be based, said Nassar. “First, relying on local manufacturers in return for increasing the percentage on the local component in the manufactured product.”

“The second path is benefitting from increasing production and the local market size in return for attracting investors and international companies to produce in Egypt. I believe that the second scenario would be more effective and would be more beneficial to the economy and the Egyptian automotive industry.”

Nassar mentioned that when putting forth a strategy for the automotive industry, the state is the party that should do so. It should rely on attracting international companies to its local market and in return presents incentives to these companies through providing industrial land, in addition to providing them with subsidised energy in return for obligating them to export part of their production.

Head of business development at Arabiat, the agent for the brand Ssangyong, Tamer El-Anani, said that talking about exporting cars without incentives would be useless. No company or investor in the automotive sector in Egypt can put forth their strategies without knowing the state’s vision, said El-Anani.

Emad El-Shorbagy said the committee coordinating the Egypt Automotive conference must form sub-committees. Each of these committees would be headed by a body concerned with the automotive sector, such as the associations, chambers of commerce, and divisions of the Federation of Egyptian Industries. He added that each body should conduct a working paper through which the major challenges facing the companies working in its sector would be determined. That is in order to avoid a conflict of thinking and demands in front of government bodies, said El-Shorbagy.

EAMA Executive Manager Husein Mostafa said it is necessary to involve EAMA, the Egyptian Autofeeders Association, and the Egyptian Automotive Council, in addition to other entities, such as both divisions of transport means and feeding industries of the Federation of Egyptian Industries. That is in order to discuss all the challenges and obstacles that are facing companies in all sectors. Each body would head the committee responsible for its sector.

Mostafa said the most important topics to be proposed include a speedy declaration of the law that will determine the government’s strategy for the automotive sector, where the vision can become clearer for current investors and future investors in the sector.

Mostafa said the government must discuss the new strategy with concerned authorities in the car market, including manufacturers, investors, and experts, before setting the strategy in order to ensure good implementation without amendments in the future.

Attention must be paid to the industries that feed the car-making industry as they are the closest to quantitative implementation and productions which can be exported to international companies, said Mostafa, adding that they encourage partnerships with international factories with high quality and technologies.

Mostafa added that it is also necessary to create a dialogue between international companies working in Egypt and the ministers of industry and investment in order to look into the existing issues and reach solutions to increase the volume of business in Egypt.

Attracting foreign direct investment and offering incentives to turn Egypt into a centre of manufacturing and exporting to global markets in the field of car manufacturing requires having dialogue with global companies about cars and their parts that are not manufactured in Egypt, said Mostafa.

Moreover, it is necessary to put forth an integrated clear plan to establish an industrial zone for car manufacturing and their parts as well as logistical services related to them in the Suez Canal area, said Mostafa. He continued by adding that a clear vision for the area should be put forth as well as a timetable for implementation. The role of the government and the private sector in the timetable must be clear, alongside the advantages that attract investors to the area and encourage them to utilise them.

This must occur along with studying the incentives that neighbouring countries offer, including Morocco and Tunisia with the aim of attracting direct investment to establish factories with high productivity for exporting, said Mostafa. He added that benefiting from these experiences in a way that suits the nature of the Egyptian market and the current situation of the Egyptian economy must be taken into consideration.

The government’s monetary policies must also be discussed and reviewed as they have left a great negative impact on current investments and delayed entering into new investments as well as weakened the growth of the market, said Mostafa.

Mostafa said cooperation is essential for the growth of the market between the government and the automotive sectors through studying and implementing the renovation and replacement projects of cars, in addition to facilitating financial leasing while allowing it for individuals as well as companies. Facilitating the procedures of providing bank loans for instalment purchasing is also essential as it forms the largest percentage of car sales, said Mostafa.

Mostafa said the government must activate the international agreements signed by Egypt, like Comesa, Agadir, and the Egypt-EU partnership Agreement. The government must also make them bidirectional, which means they must involve exporting as well importing products. This requires cooperation from companies serious about the issue.

International standards must be applied on all Egyptian products in the sector of cars, as the standards that are currently applied are of a small number, said Mostafa. Forty-six standards are expected to be applied as the most basic standards for any car.

Looking for a global partnership for making a popular car with a production volume of more than 100,000 cars with help from government authorities to market these cars locally is also required, as well as looking for various financial solutions, said Mostafa.

Mostafa pointed out that there is a need to review the trial prices, reduce customs and standardise the sales tax on domestic products in order to increase the sales of the local market to increase production and enhance the country’s income.

He called for issuing an orderly law for the formation of the Supreme Council of Automotives, to include all parties of manufacturers, dealers, relevant government agencies, ministry of investment, ministry of finance, technical education and the Consumer Protection Agency, to conduct research and studies for the advancement of the automobile industry and its components, so as to ensure competitiveness with global markets.

Moreover, Mostafa signalled the need to develop a system for training technical manpower, through a partnership between government agencies, the private sector, and international companies, both in technical schools or specialised training centres.

In addition, he highlighted the importance of a system for registering new cars through linking sales centres to traffic departments to curb license manipulation, as well as developing a new system for driving tests in accordance with international standards.

General coordinator of the conference, Mohamed Aboul-Fotouh, said that Business News suggests that the agenda contain four sessions: the first to host ministers working close to the automotive sector, the second to review opinions of foreign companies on the Egyptian market, with the latest two sessions displaying the most important challenges facing companies operating currently in the Egyptian market.

El-Shorbagy said they should not display obstacles that would face companies’ investments in Egypt so as to avoid affecting their decision if given a negative outlook.

Sakr said that the conference agenda should be changed to provide better engagement for ministers, so they would not go to the conference, deliver their notes, and leave.

He proposed selecting a number of foreign companies that have significant experience in the Egyptian market to brief ministers attending on the major challenges they face before ministers give their notes.

Aboul-Fotouh said that the third session will include talk about monetary policy and the future of investment in the Suez Canal Development Axis. The fourth session, he added, will discuss automotive sports and their importance to the state.

Tamer Bashat said that automotive sports are facing major challenges, being the victim of the conflict between the Egyptian Federation for Motorsports and the Automobile and Tours Club of Egypt on leading Egyptian motorsports.

Bashat said that motorsports need a racing track to organise a world tournament. He noted that the sport is very attractive for tourism. Moreover, he pointed out that there was once an intention to build a track seven years ago, but the decision was delayed until Bahrain became the world’s first destination for motor sports in the Middle East, having built the longest track in the region.

Furthermore, he signalled the attempts of setting up the Rally of the Pharaohs. However, he added that racers were invited from all over the world, before the Ministry of Interior became suspicious about groups of youth gathering and stopped the events of the rally, leaving foreign visitors with a distorted idea on motorsports in Egypt.

El-Shorbagy suggested organising a committee from the subcommittees headed by the stakeholders of the automotive sector, such as the chambers of commerce, divisions, and associations.