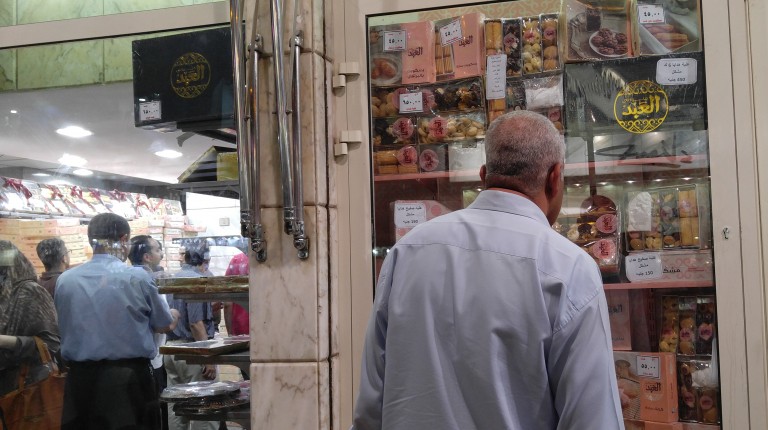 An important Eid tradition in Egypt is baking a biscuit named kahk. Children gather around their mothers and grandmothers in the kitchen to watch them and play with the dough in an imitation of what they see. Nowadays, many Egyptian families prefer to buy ready-made kahk rather than making it at home. This may save time and effort, but it does not cut costs.

The price of kahk in large bakeries and specialised dessert shops has increased by 10% to 30% this year compared to 2015. This comes despite the recession dominating the market due to low consumer demand in the current period.

Manufacturers of the kahk biscuit attributed the increase in prices to higher prices of raw ingredients used in making kahk, higher electricity prices for factories and shops, and higher wages for workers.

Daily News Egypt toured some bakeries to survey the average price of the biscuit currently. Plain kahk is priced EGP 50-68 per kilogram, kahk with malban (Turkish delight filling) is EGP 55-78, kahk with agameya (honey, sesame, and nut filling) is EGP 60-70, and kahk with walnuts is EGP 80-90.

The price of petit four cakes (various small French desserts) increased by 10% to 20%, to range between EGP 60-80 per kilogram. Other biscuit prices reached EGP 45-63 per kilogram.

However, in local bakeries these prices decreased. Kahk ranged from EGP 30-38 per kilogram, biscuits from EGP 22-28, and petit four cakes from EGP 30-40.

Prices have increased due to rising prices of production input such as raw imported sugar, according to head of the sweets division at the Cairo Chamber of Commerce and owner of El-Abd Patisserie‏, Salah El Abd.

This is in addition to decreased foreign currency reserves leading to increased costs of production and import costs and the exchange rate of the Egyptian pound against the US dollar. Customs and taxes on imported goods such as pistachios, walnuts, and other nuts have also increased.

The deteriorating economic situation has led to reduced corporate demand for sweets, prompting dessert shops to reduce their range of products offered during this year’s Eid Al-Fitr, according to a member of the sweets division at the Cairo Chamber of Commerce, Sayed Al-Awam.

This year’s festive season has proved to be the weakest in demand for Eid products, Al-Awan said, citing a 50% decline.

Meanwhile, the Ministry of Supply has begun offering large quantities of kahk and biscuits in all branches of consumer outlets, wholesale shops, and ministry outlets at a discounted rate of 30% on the occasion of Eid Al-Fitr.

Acting chairperson of the board and managing director of the General Company for Greater Cairo Bakeries, Hisham Fawzi, said that the company offers the finest quality desserts at a price of EGP 33 per kilogram for biscuits and EGP 44 for kahk.

Head of branches at the Supply Ministry-affiliated Nile Company for Consumer Complexes, Sami Mahmoud Ali, said that the 80 branches of the company located across all governorates is seeing a weak turnout nowadays but expects this will increase in the five days before Eid Al-Fitr.

An employee at El-Abd Patisserie, Mohamed Abdel Samd, said that prices have increased by 30% and turnout is very low. The price of petit four cakes in particular have increased dramatically.

According to Abdel Samd, since the 25 January Revolution turnout has been low compared to during Mubarak’s regime. This is due to the increase in the US dollar exchange rate, and electricity and gas costs for ovens.

Ashraf Mostafa, an employee at Monginis Bakery, agreed with Abdel Samd about the increase in prices, noting that prices in Monginis were raised by 3-10% for the same reasons. Mostafa added that customer turnout tends to increase in the last five days of Ramadan and he expected the same rates of consumers as 2015.

The manager of a bakery in downtown Cairo, Gamel Abdel Kareem, said that his bakery raised prices by EGP 10-12 per kilogram as the price of imported nuts—an important ingredient in kahk—also went up.

Daily News Egypt spoke to a woman who was buying kahk from Bisco Misr, a brand specialising in baked goods. She said that she has tended to buy kahk and other biscuits from this brand as it is cheap and of a good quality. However prices have increased by EGP 5-10 for different types of biscuits. Despite the majority of ready-made biscuits being expensive this year, she said that she does not have enough time to make kahk of the same quality at home.

Another woman, Om Mohamed, was buying kahk from local bakery in the Faisal district in Giza governorate. She said that she was shocked by the prices of kahk at different stores that she shopped at last year, so she had to resort to the local bakery to buy these biscuits for her children because it is cheaper. Ramadan nuts are also expensive, she added, saying that: “We are fed up.”