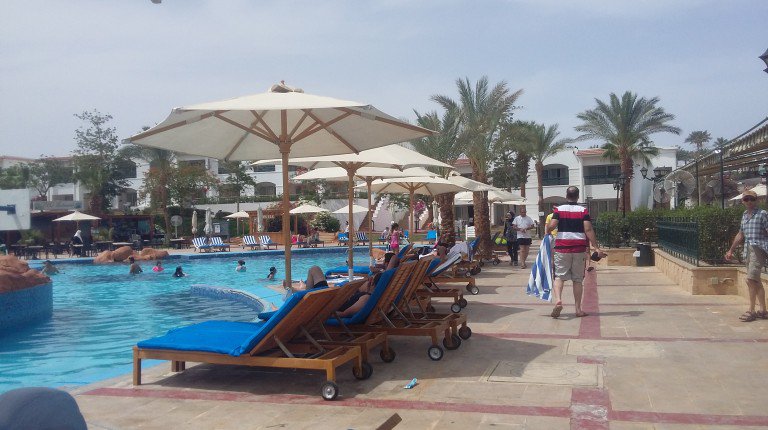 Hotels and resorts are preparing special offers for Egyptians to promote domestic tourism during Eid Al-Fitr, seeking to attract as many visitors as possible amid dwindling tourism numbers.

Ain Sokhna is expected to see the highest demand among domestic tourists, followed by Alexandria, the North Coast, and then Sharm El-Sheikh and Hurghada.

Hotels and resorts in Ain Sokhna and Alexandria have been the top destinations for many Egyptian families in recent years, due to their proximity to Cairo and the easy transportation network for both cities. This greatly reduces the cost for families, especially when compared to Hurghada and Sharm El-Sheikh, as both would require flights no cheaper than EGP 1,500 per person.
Despite these statistics, head of the Tourism Investors Association in South Sinai Hesham Ali said Sharm El-Sheikh hotels are an ideal destination for Egyptians.
He predicted the number of visitors to Sharm El-Sheikh will rise in the last week of Ramadan, giving a push to the start of the domestic tourism season, which begins in July and extends roughly until September.
Prices in Sharm El-Sheikh range between EGP 300 to EGP 1,200 per night for a single room.
Egyptian Tourism Federation member Hussein Shoukry said that the short time period of the holiday, which will last for four days starting 6 July, would push more Egyptians to visit Ain Sokhna.

According to Shoukry, Ain Sokhna is the most important area for domestic tourists, especially during weekends and holidays, attributing his opinion to its proximity to Cairo.

In general, hotel prices during the holiday will be suitable for all citizens, with offers beginning at EGP 200, said chairperson of the Egyptian Federation of Chambers of Tourism, Elhamy Al-Zayat.

Al-Zayat noted that domestic tourism will offer support to hotels and resorts at this time of the year, as inbound tourism from Europe declined in October following the Russian aeroplane crash in Sinai.

Tourism revenues have declined during the first five months of the year to $832m, almost 62% less when compared to the same period in 2015.

In Taba and Nuweiba, investors are also promoting tourism offers. Hotels are offering Egyptians programmes for EGP 300 per night, which include breakfast and dinner. Another hotel in Nuweiba set the bar lower, offering a similar package for only EGP 200.

Chairperson of Utopia For Real Estate & Tourism Investment Nadia Shalaby said she hopes Egyptians will visit her hotel, expressing dissatisfaction with the sharp decline in the number of visitors.

She urged Egyptians to explore their country, saying that visiting the area will keep tourism there from disappearing.

Samy Soliman, head of the Taba and Nuweiba Investors Association, pointed out that the area offers a different type of tourism compared to other regions in Egypt. He explained that visitors can choose between beaches, safaris, and camps. Along with the lower costs, this makes the area more attractive, he added.

Alexandria and the North Coast are also expected to witness a high demand, according to former chairperson of the Chamber of Hotels Wassim Mohy El-Din. Vacation in both regions will be pricey, with hotels beginning at EGP 700 – EGP 2,000 per night in Alexandria and costing even more in the North Coast.

For the Red Sea region, chairperson of the Investors Association in Marsa Alam, Adel Rady, said that Hurghada is usually the busiest city with the highest number of inbound tourists in the governorate.

He predicted occupancy will rise to over 60% during the Eid vacation in all tourist destinations along the Red Sea, which Hurghada and Marsa Alam coming on top.