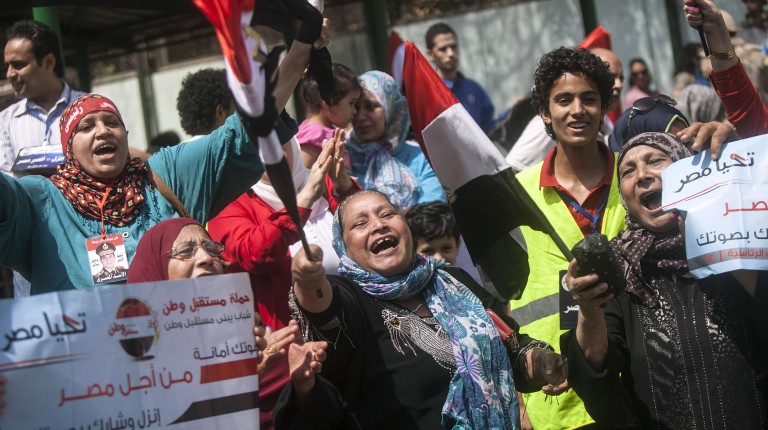 Since his appointment as Minister of Defence on 12 August 2012, the popularity of Abdel Fattah Al-Sisi has been an interesting political phenomenon. There were strong foundations for its expansion; Al-Sisi stood as the figure of the Armed Forces and the alternative to religious fascism at a time when anger peaked against the Muslim Brotherhood.

The Brotherhood’s regime was widely opposed, marked by mass protests erupting across the country on 30 June 2013, while the public became more and more familiar with Al-Sisi’s presence.

Al-Sisi addressed Egyptians for the first time with the “roadmap speech” on 3 July, in which he told the people that Mohamed Morsi was no longer their president and Adly Mansour would be appointed as the new interim president. Al-Sisi spoke from a solid legitimate platform.

“He has the requirements of popularity,” said professor of political science at the American University in Cairo Tarek Fahmy, who described these requirements as “charisma, sense of leadership, and [being] a religious man”. Moreover, Al-Sisi possessed the tools, he adds.

After the so-called legendary ousting of the Muslim Brotherhood in the aftermath of 30 June, Al-Sisi would continue to lure the people in. Only three weeks later, Al-Sisi was able to mobilise thousands of Egyptians to take the streets on 26 July 2013 in his support, authorising him, as he requested, to combat terrorism.

“I ask honest Egyptians to come out on Friday to  order me to fight potential terrorism. If they use violence and terror, then the military and police ought to be delegated to act. On Friday we meet,” Al-Sisi said on 24 July in a half-hour speech.

According to Fahmy, the former Minister of Defence gradually gained not only Egyptian, but also Arab attention. “Al-Sisi quickly began the quest for legitimacy and decided to call for and execute a specific national project in a certain timeframe, which is the new Suez Canal,” Fahmy stated.

He clarified that what mattered was not necessarily the type of project, but rather the idea of a common national goal, which in his opinion took Al-Sisi’s predecessors years to achieve, referring to former president Gamal Abdel Nasser with the 1956 nationalisation of the Suez Canal and Anwar Sadat with the 1973 war on Israel.

Political science professor and former member of parliament Gamal Zahran agrees that Al-Sisi’s popular support mainly depended on him being the symbol of the Armed Forces.

“When people revolted on 30 June 2013, they were already aiming for a military presence. They could have supported another army leader instead, as long as he was from the institution they saw as their backer and saviour from the danger of the Muslim Brotherhood,” Zahran argued.

Yet according to him, what distinguished Al-Sisi and contributed to his success was “the way he touched upon the emotions of the people”. “He spoke a popular language, his speeches carried cordiality and love, and that really got to people,” Zahran stated, referring to a phrase the president once used: “these people have not had a tender hand to pat on their shoulder.” This gives the people a parental sentiment, Zahran added.

Likewise, Fahmy pointed to the simplicity of the references and the language used, like when Al-Sisi spoke of his mother in one of his speeches. “It gave the impression of a religious man who honours his parents. Besides, the president improvises a lot during his speeches, and while intellectuals and the political elite would not like that, it is attractive to ordinary people. They see him as credible,” Fahmy explained.

The amount of support shown for Al-Sisi was striking during the 2014 presidential elections, where there was little competition against him. In these elections Al-Sisi received 97% of the votes.

“Even when he left the army in order to be eligible for the presidency, people still looked at him as the military protector. Scientifically, the voting patterns in these elections were confusing. Obtaining that percentage would not occur in elections where chances were equal, and, therefore, Al-Sisi was an electoral phenomenon. This was really what the people wanted,” says Zahran.

Nonetheless, two years after the rise of Al-Sisi, both politics experts are concerned about the future of this popularity, arguing that being the people’s saviour might not be enough to guarantee continuity.

On one hand, Fahmy argued that there is no scientific method of measuring the increase or decrease of Al-Sisi’s popularity, but criticism of Al-Sisi is on the table. Acknowledging Al-Sisi’s characteristics that helped him gain leadership of the country and the acceptance of the people, Fahmy shed light on the dangers of the continued one-man show.

“I believe the president wants a division of power, but the fact is that this is not currently happening. He remains the face of everything that happens, and this backfires when he has to be held accountable for the mistakes of others,” he explained.

In his opinion, Al-Sisi needs national alignment. As an example, Fahmy asked why Al-Sisi would allow a public division on the issue of the Red Sea islands of Tiran and Sanafir, while people should be united in finding a solution to the Renaissance Dam crisis.

On the other hand, Zahran argued that Al-Sisi’s popularity is decreasing year after year as a result of him really being tested by public opinion at debates on issues important to citizens. An indicator of that, he said, is that “two years ago nobody could criticise him, but now criticism has increased”.

“Taking a public cause as an example, the Red Sea islands issue was the first time Al-Sisi spoke and people did not fully listen to him,” he stated. He also referred to the people’s basic and everyday needs. “Many of Al-Sisi and the government’s policies were not in favour of improving people’s lives, seen in widespread corruption and the presence of Mubarak’s men on the scene,” Zahran explained.

There have been a number of economic, political, and social issues which were sources of public controversy and criticism as well as repeated government failures despite several cabinet reshuffles.

Thus, while the two first years of Al-Sisi’s term were marked by citizens cherishing the role of the army in facing the potential terrorism threat, the remaining two years seem to be conditioned by a need to foster changes that the people can really touch upon.