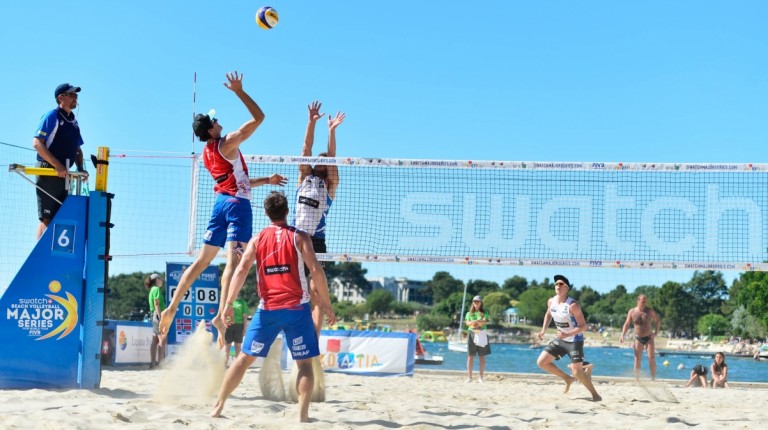 For the second consecutive year, the Croatian island of Poreč is hosting an international beach volleyball tournament as part of the Swatch Major Beach Volleyball Series.

Poreč is one of the most visited destinations in Croatia and is famous for its outstanding site by the sea.

The tournament started on 27 June and will end on 3 July.

Aside from Croatia and its neighbouring countries – Slovenia, Serbia, and Italy – many countries are participating in the tournament, including Austria, Czech Republic, Poland, Latvia, Lithuania, Spain, France, Switzerland, the Netherlands, Germany, England, Denmark, Norway, and Sweden.

The tournament also includes players from other continents, with players from Brazil, Mexico, Canada, the US, New Zealand, and Ghana.

The Poreč Major is the second of five tournaments in the 2016 Swatch Major Beach Volleyball Series. The first tournament was the Smart Major Hamburg and the third, fourth, and fifth tournaments will be the Gstaad Major, A1 Major Klagenfurt, and Swatch World Tour Finals respectively.

During the 2015 Poreč Major, Dutch players gave an outstanding performance as the Dutch duo Alexander Brouwer and Robert Meeuwsen won gold in the final match against the Canadian duo Josh Binstock and Sam Schachter.

The bronze medal match lasted 58 minutes and saw the Italian duo Alex Ranghieri and Adrian Carambula take the medal after defeating the Dutch Reinder Nummerdor and Christiaan Varenhorst, with scores of 21-18, 18-21, 15-10, and the final score of 2-1.

In the 2015 Poreč Major women’s final, which lasted 58 minutes, the gold medal went to the Brazilian duo Larissa Franca and Talita Da Rocha Antunes after beating Canadian pair Sarah Pavan and Heather Bansley, with scores of 21-16, 25-27, 15-12, and the final score of 2-1.

Germany v France: The contests that will decide the game