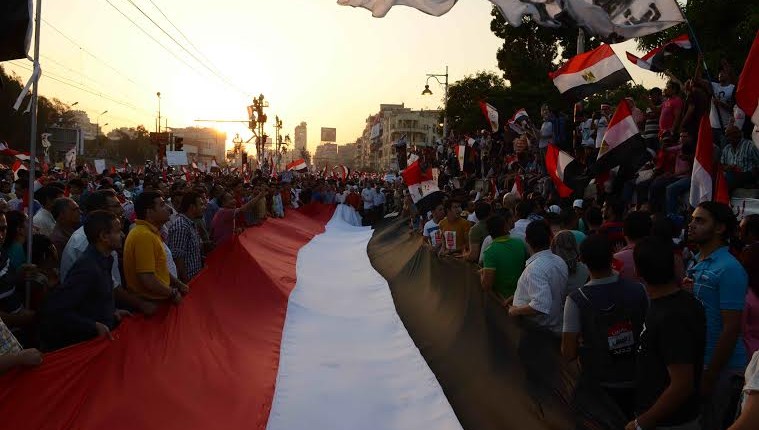 Streets loaded with millions calling for the fall of the regime, marshals roaming Egypt with people waving Egypt’s flag and signs that read “get out” over their heads, national songs filling different media outlets, all with the promise not to return home without the fall of Muslim Brotherhood’s regime. That was the scene no one could have missed or wrongly interpreted on 30 June 2013.

In celebration, Tahrir Square is covered with Egypt’s flag, and decorations over light poles and banners of Al-Sisi’s picture can be seen around downtown Cairo. In the governorates, celebrations are no less than those in the centre of Cairo. In Gharbeya governorate, a cultural programme is being conducted in order to praise the anniversary. At one of the widest squares of Gharbeya, the main culture centres are providing a place for people to gather for a screening of a documentary about the 30 June uprising and the main achievements of Al-Sisi through his presidency.

Also, Child Culture Palace, a cultural centre in Gharbeya governorate, is holding an exhibition called “revolution in the eyes of children”, in which it will show paintings drawn by young children about the day people decided not to stay silent for the second time and asked for the regime to fall.

The celebrations also include the screening of short films about both the 30 June uprising and the 25 January Revolution as well as artistic shows for children in which they sing popular national songs.

In Ismailia, streets are decorated with lights and balloons. This is beside an open air theatre, which is specially set up for the public to attend and participate in the celebrations in which a choral team sings traditional national songs about revolutions. In New Valley governorate, marches roam the streets remembering the days they lived three years ago when all of the residents refused to go home without the fall of the regime.

During this same period in which many pro-system locals support the 30 June uprising, some of the artists who participated at the protests have shown feelings other than celebration.

Ramy Essam, or “the revolution’s singer” as he was known at the time, launched his latest song Al-Horriyeah Lel-Geda’an (Freedom for the brave) a few days ago. At the launch, which coincided with the third anniversary of the uprising, he dedicated his song to those who suffer from some of the consequences of Al-Sisi’s ruling years.

“Those who are in jail don’t feel the spirit of Ramadan, Eid, or anything, remember them,” he stated. “Freedom for everyone we don’t know.”

Essam moved to Sweden after his interrogation in June 2014 by the National Security Police. The singer has not been able to perform since the ouster of former president Mohamed Morsi, except for a small concert launching a report on censorship and creativity, which was organised by Freemuse and the Association for Freedom of Thought and Expression in June 2014.

How films of the past envisioned the future

Tamarod: From deposing Morsi to its own collapse

30 June and reinventing the revolution wheel