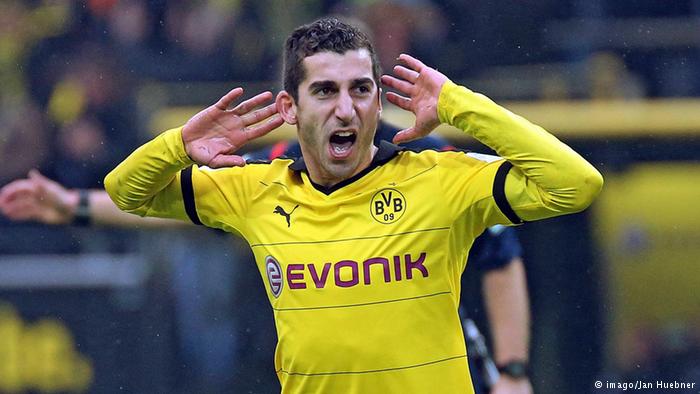 Henrikh Mkhitaryan’s long-anticipated move from Borussia Dortmund to Manchester United has finally been confirmed. He joins the Premier League club on a for a reported 42.5 million euros.
“Based on a completely new situation, this transfer was a difficult trade-off for us. Manchester made us a very attractive offer,” explained Dortmund CEO Hans-Joachim Watzke.

“Had we refused it, the player would have left us on a free transfer in 2017 and we would only have delayed the matter of a replacement for a year.”

The move comes on the back of a breakthrough season for Mkhitaryan in which he scored 21 goals and created 20 more across all competitions, adding final product to his graceful style, vision and excellent passing range. He also claimed the DW Bundesliga Player of the Year award as the best player in the German top flight.

He becomes new Manchester United manager Jose Mourinho’s third major summer signing, following Ivorian defender Eric Bailly and Swedish superstar Zlatan Ibrahimovic. He joins a club who have slipped off the pace in the English league in recent years under previous bosses Louis van Gaal and David Moyes. United finished fifth in the Premier League last season and will play in the Europa League this term.

The 27-year-old is the third high-profile departure from the Bundesliga runners-up this summer, following Mats Hummels (Bayern Munich) and Ilkay Gündogan (Manchester City) out of the door. The Armenian follows in the footsteps of Shinji Kagawa, who also joined the Red Devils after an impressive Bundesliga season with Dortmund, in Kagawa’s case 2011/12. The move didn’t work out for Kagawa, who returned to Signal Iduna Park in 2014.

The west German club have already invested heavily to refresh their squad, with Ousmane Dembele, Marc Bartra, Emre Mor and Sebastian Rode among those already brought in.

Mkhitaryan joined Dortmund from Ukrainian side Shakhtar Donetsk in 2013 after he was heavily linked with United’s domestic rivals Liverpool. The 59-cap international could be set for a debut against Leicester in the Community Shield – the English season’s curtain raiser between champions and FA Cup winners – on August 7, with United’s first league game of the season slated for August 13 away at Bournemouth.

Marc Bartra on the ‘hardest 15 minutes’ of his life