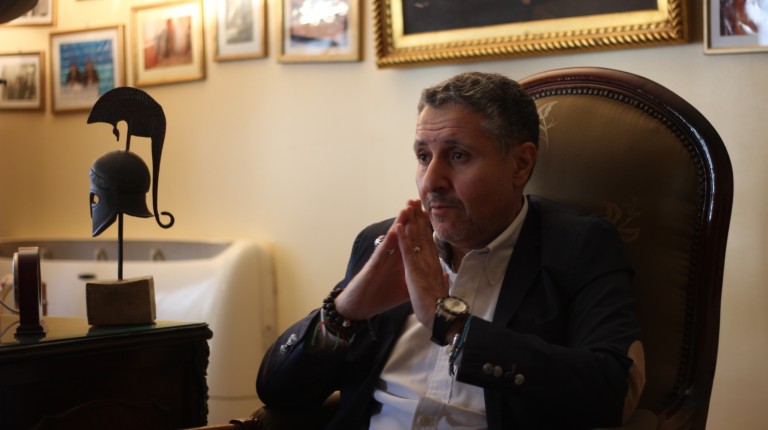 While Egypt ratified the Convention Against Torture in 1986, among others, the government has continuously denied reports exposing torture by human rights advocates.

As part of an attempt to quash any notion that torture is a practice employed by the government and its associates, the state has recently targeted a prominent human rights lawyer and two judges after they drafted an anti-torture bill and sent it to the president for review. The trio has been summoned for investigations and might face trial on charges of threatening national security.

Daily News Egypt interviewed lawyer Negad El-Borai, the director of the United Group Law firm, about his anti-torture bill and how it aimed to combat crimes of torture and human rights violations.

A law school graduate of 1977, El-Borai began his career in defending human rights in 1986 with the Egyptian Organisation for Human Rights.

Why did you choose to work in favour of human rights and continue to do so despite the difficult conditions?

I continue because as long as a government violates human rights, there has to be people defending them and I will stop when they stop or when they truly bring those violating human rights to justice.

Why are you being investigated by authorities?

Throughout my life and career, I expected to be interrogated for a million things, but certainly not for this. When I drafted an anti-torture law, I honestly anticipated reward.

The reason we presented this project is that, during the Universal Periodic Review of March 2015, Egypt accepted recommendations which included combating torture and vowed to introduce legislations to enable accountability for torture crimes.

However, when we did, the Supreme Judicial Council accused Judges Hisham Raouf and Assem Abd Al-Gabbar of working with an illegitimate group—of which I am the manager—on an anti-torture draft law in order to “put pressure on the president of the republic”.

All we did was send the draft law to the president, because Egypt had no legislative authority at the time.

“I was confronted with claims of a National Security officer who said I was implementing a non-violence doctrine and the revolution of minds, aiming to overthrow the regime. I don’t know what that means,” said El-Borai.

What are the major outlines of the draft bill?

There is one particular article which I believe the security body freaked out about, and which I believe is the reason for my prosecution. It states that the chief of the police station, prison, or detention facility is responsible for the safety of the people in it.

Therefore, he should be questioned about any torture that occurs in the place he oversees, and if he fails to reveal the perpetrator, he should be held accountable.

Why would this article make the state angry?

The state does not want the people to know who committed the crime because it is heavily and almost solely dependent on the police, amid the absence of other institutions, and therefore it is reluctant to expose police officers. Imagine if they decided to go on strike when there is a protest out there chanting against the regime?

On the other hand, we thought making it a police supervisor’s responsibility to reveal the name of the torturer will put an end to the crime once and for all. Many torture cases don’t bring justice to the victims because of their inability to identify their torturers, as they are usually blindfolded and officers use fake names when torturing victims. Although a victim can be financially compensated by the state, the perpetrator still escapes accountability.

A state that depends on replacing politics with the use of force will perform torture, or at the very least not want to fight it. Yet, I maintain that the bill would be useless without this point.

How did the project come to light?

The law was drafted with the collaboration of my colleagues and legal experts Ragia Omran, Ahmed Ragheb, and Emad El-Feky, with the highest standards.

Then, we asked for the expert opinion of the two judges, who actually reduced many of the penalties we included, from a perspective they saw that would be less ‘insulting’ to prosecutors.

From there, we widened the circle of discussion of the law, to include MPs, lawyers, members of the National Council for Human Rights (NCHR), and members of the 50-member committee.

The project was in partnership with the US NGO National Centre for State Courts, providing financial assistance and translations of other countries’ anti-torture laws, said El-Borai. It is also the effort of nearly 40 experts in human rights and legislation.

We have seen cases where police officers were brought to justice, notably the case of lawyer Kareem Hamdy, yet this has not prevented torture. Why?

Any legislation in place would be useless if there is not real political will to reinforce it. However, accountability happens when there is an impossibility to hide the crime, it is an exception.

This is what the Hamdy case highlighted. The officers were brought to justice because other police officers told on them when they got scared of getting exposed, while lawyers were actively digging up the case.

Among other debates related to human rights, there are ongoing discussions on amending the controversial Protest Law, what is your opinion?

The Protest Law should be made of exactly three articles: first, peaceful protest is a right. Second, protesters should send prior notification—and not request for authorisation—to security authorities. Third, if the Ministry of Interior has objections it should take them to court.

Other than that, all articles penalising the obstruction of roads, attacks on facilities, and assaulting security personnel are a duplication of what’s already in the Penal Code.

The government is extremely fearful of protests, after witnessing two overthrown regimes and two jailed presidents because of protests. However, they fail to understand that things have changed and that when masses took to the streets on 30 June 2013 they aimed to make it their final protest by demanding stability.

How do you see the role of the National Council for Human Rights and is it really limited?

President Abdel Fattah Al-Sisi spoke of the numbers of prisoners, suggesting there were a small number of political detainees in comparison to circulated numbers. What is your comment?

We don’t have the access to information to provide exact figures, but the total number of prisoners across Egypt ranges between 80,000 to 90,000, with nearly 10,000 to 20,000 of them being political detainees, including Muslim Brotherhood supporters. Claims of 40,000 and above are exaggerated.

But those numbers are likely to increase given that the state keeps constructing new prisons. I am actually astonished by a country that is so eager to build prisons instead of schools.

How would you respond to accusations against human rights advocates that they are not credible because they make inaccurate claims?

Human rights NGOs work in a hostile environment—the government and its security bodies don’t want you there. With limited resources and narrow access to information, there are problems of documentation of course, and naturally a margin of error.

Yet, being mistaken about violations and pushing for urgent action is better than revealing such information late, after somebody dies.

Nonetheless, fixing mistaken reports is the responsibility of the state. Not once did the government deny torture claims supported with medical reports and photos by providing their own evidence.

I dare anyone to tell me there aren’t beatings in police stations. Nobody believes that.

What is the state’s problem with foreign funding of human rights NGOs? You were accused of illicitly receiving funds from the US organisation NCSS?

Money laundering authorities are monitoring every pound. This financial assistance is also included in the annual budget presented to tax authorities.

Also, I specifically notified the National Security apparatus about the anti-torture bill project, and we have previously collaborated with the Ministry of Interior.

Does this mean there are no real monitoring purposes on behalf of the state, but rather a desire to cut those funds?

A desire to block civil society in general. Today, funding is not a major problem; I mean people raised EGP 5m to bail out a hundred young detainees in a matter of few days. Other than that, the state knows about the funds as it knew in 2011. This is agreed upon between the Egyptian and other governments.

The security apparatus keeps saying that we threaten national security, but they don’t even say what activities are considered threats, and what in the NGOs reports are dangerous.

How do you see the case of Italian researcher Giulio Regeni?

My conviction is that nobody would go unpunished for a crime they committed. As for Italy, I do not think it would compromise its relations with Egypt, but it may settle for compensation.

Does Egypt risk facing issues with its foreign allies over issues related to human rights?

Egypt’s foreign relations could suffer in the long term, when it cannot afford to buy international silence. In the same way Egypt is managing its internal politics, it is choosing to display power when dealing with the global community.

But the violations it commits inside aren’t without international support. I don’t believe in condemning statements and the like, they are just a camouflage and the global refugees issue shows how much the world isn’t ready to put an end to human rights violations.

What is your view on enforced disappearances claims in Egypt, or do they fall under unlawful detention?

Enforced disappearances describe a long period, not four days, not 20. Once the location of the disappeared person is revealed, it is called unlawful detention. In Egypt, there is currently the case of Ashraf Shehata, who disappeared almost three years ago now.

Is there a way out of all this?

The regime should know that such practices have a dead end and that there is no point in implementing models that previously failed. Political crackdown and torture practices led to the defeat of Gamal Abdel Nasser in 1967 and the assassination of Anwar Sadat in 1981.

In the meantime, pressure should continue, even if some will die or be imprisoned.

Finally, I want to remind the president, who aspires to become another Nasser: Nasser could afford to give something to the people in terms of industrial development, while Al-Sisi does not have these kinds of resources.