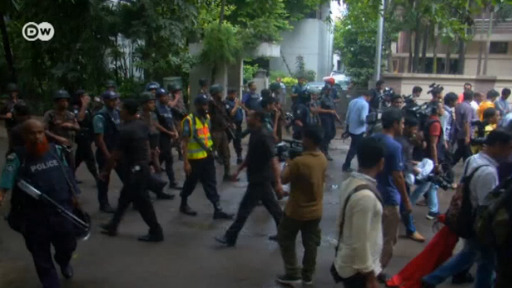 At least 28 people were killed when armed militants stormed the cafe and took the customers and wait staff hostage on Saturday. Most of the victims were foreigners, including nine Italians and seven Japanese.

The so-called “Islamic State” (IS) militant group claimed responsibility for the attack, saying it was an attack on citizens from “crusader countries.”

Hasina warned that such violent extremist could destabilize the country and turn it into a failed state. She also disavowed the militant’s brand of Islam.

Hasina pleads for no more killing

“Islam is a religion of peace,” she said in a televised address. “Stop killing in the name of the religion.”

In Italy, Prime Minister Matteo Renzi expressed outrage at the killing of his countrymen. “The terrorists want to rip away the daily fabric of our lives,” he said.

In total, 13 people were rescued. Security forces said their efforts to put an end to the seige were stymied by heavy gunfire and grenades.

Two police officers were also killed in the ensuing violence.