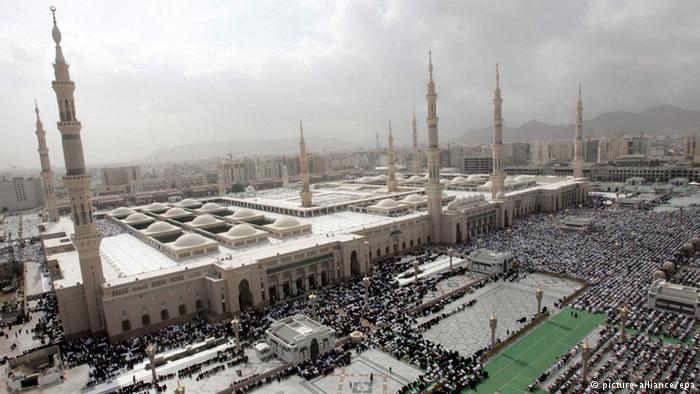 A suicide attacker detonated an explosive near the security compound of the Prophet’s Mosque in Medina, Saudi Arabia, local television said on Monday. Built under the direction of Muhammad himself in the city of his birth, the mosque is considered one of the holiest sites in Islam, second only to the Grand Mosque in Mecca.

Officials have not yet confirmed if anyone else was killed or wounded in the Medina attack.

The blast came on the same day as two similar attacks in other parts of the country. Earlier, a man killed himself and wounded two security officers near the American consulate in the city of Jeddah. According to the authorities, the man had a permit to live in the kingdom but was not a Saudi national.

Interior Ministry spokesperson General Mansour al-Turki said that the suspect in the Jeddah bombing, who appeared to be in his 30s, had been closer to a mosque than the consulate, and that authorities considered the holy site to be the likely target. Turki added on Twitter that “devices that failed to explode (were) found in the vicinity of the site.”

He said that “investigations (are) ongoing to find out the goals and motives of the bomber.”

Mere hours later, twin bomb blasts were also reported in the eastern city of Qatif, home to many of the country’s Shiite minority. Authorities have yet to confirm witness reports of a car park near a mosque being destroyed, as well as possible casualties.

No one has yet claimed responsibility for the attacks, but Saudi Arabia has seen similar bouts of violence at the hands of “Islamic State” inspired extremists.