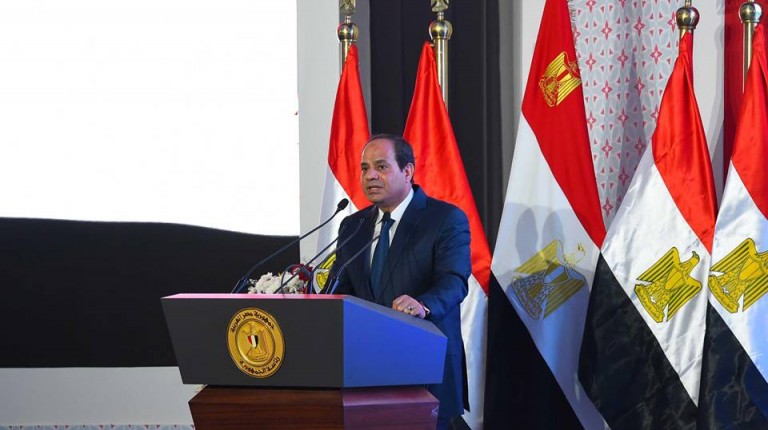 President Abdel Fattah Al-Sisi called on the Egyptian people to work and unite for the sake of Egypt in a speech he gave on Sunday to commemorate the third anniversary of the 30 June Uprising.

Al-Sisi said that 30 June was a result of the Egyptian people’s will and they united to turn this will into reality. He asserted that the Egyptian military and the people are inseparable. Moreover, he said the uprising on 30 June was inevitable as it was triggered by the people’s determination.

“Egypt is telling all of you to not disagree—there is no reason to disagree—and to not let anyone make fools of you,” the president said. He added that Egyptians can stop eating and sleeping in order for their country to prosper. “This is not Egypt’s real status; Egypt deserves a much better place.”

Al-Sisi asserted that there have been several achievements over the past two years; however, this is still just “one step out of thousands of steps”. Many achievements are yet to be realised over the next years to reach the “real dream”.

On 30 June 2013, political groups and citizens took to the streets, calling for the ouster of former president Mohammed Morsi and the Muslim Brotherhood regime. The military had urged the former leader several times to resolve his party’s complications with opponents. With no response from Morsi, Al-Sisi led a coalition to force him out of office. The movement was backed by several religious figures and opposition leaders.

Despite the current 2014 Constitution acknowledging the 25 January Revolution which toppled the Mubarak regime as a national uprising—as it does the 30 June Uprising—there has proven to be a clear difference between how security forces tend to respond to both occasions’ anniversaries.

Ahead of the fifth anniversary of the 25 January Revolution, security forces raided homes of activists and residents living nearby Tahrir Square in Downtown Cairo. Dozens of people were also reportedly arrested at that time on alleged charges of belonging to the outlawed Brotherhood group.