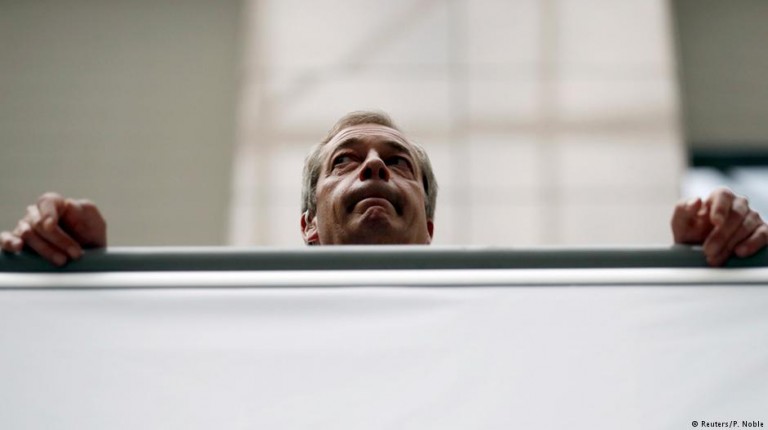 Farage, the leading anti-EU voice in British politics, said Monday he was quitting as leader of the UK Independence Party (UKIP), the party he helped found in the early 1990s.

Farage had stepped down last year as UKIP leader after failing to be elected into the British House of Commons. He withdrew his resignation three days later.

Speaking to a scrum of reporters in London, Farage said he’d only returned to UKIP to campaign for Britons to vote to leave the European Union.

“I was persuaded to come back for one reason and that was to fight this referendum,” Farage, 52, said. “And I’m very pleased I changed my mind just over a year ago and came back and fought this referendum – I won’t be changing my mind again, I can promise you.”

The future of the EU was thrown into disarray after 52 percent of the British voted to exit the EU. Prime Minister David Cameron has resigned and some of the principal anti-EU members of his own party have also declined to seek the top post.

Farage says he has no desire to return to the Conservative Party – which he left in 1992. “The victory for the ‘Leave’ side in the referendum means that my political ambition has been achieved,” he said.

He also said he’d retain his MEP seat while Britain negotiates its exit from the EU. But there has been no word on who might succeed him as UKIP leader; theparty list controls 22 seats in the European Parliament.

Political turmoil has gripped the UK since the Brexit results with the UK’s credit rating downgradedamidst economic uncertainty. Earlier, Britain’s treasury chief George Osborne announced plans to cut the UK’s corporate tax rate to less than 15 percent to encourage companies to invest and ease business concerns about the country’s vote to leave the EU.

Osborne says the cut is meant to underscore that Britain is “still open for business,” despite its intentions to leave the EU. A cut of about 5 percentage points brings Britain in line with Ireland’s 12.5 percent rate.

Brexit – the end of globalization?