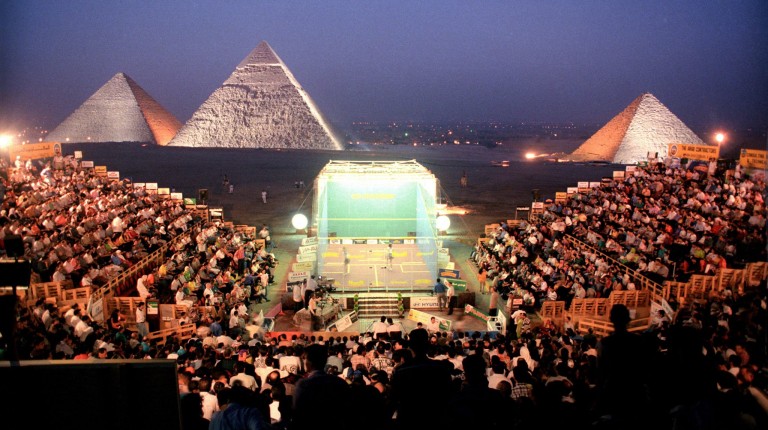 After a 10-year absence, the Al-Ahram international squash tournament, also known as Al-Ahram Squash World Open, will once again be hosted at the Pyramids of Giza.

The tournament’s prize money this year will be $100,000, and the tournament will take place from 17-23 September.

Mansi said that celebrating these important squash events at tourist sites, such as this event at the Giza Pyramids or the El-Gouna International Squash Open is a useful method of promoting tourism in Egypt.

Khalifa expressed his happiness over Egypt resuming hosting one of the most distinguished squash events in the world. He considers this event one of the main reasons Egyptians excel in the sport.

Omar Mosaad, an Egyptian international squash champion, previously told Daily News Egypt: “I think [the Al-Ahram squash tournament] did not only inspire me, but it inspired the majority of Egyptian squash players from my generation, including Ramy Ashour, Mohamed El-Shorbagy, Raneem El-Welily, and Omneya Abdel Kawy.”

Mosaad added, “The Al-Ahram Squash World Open was among the most important international and annual squash championships.”

Nicol played for Scotland until March 2001, after which he played for England.

In 1998, Barada surprised the world when he won the tournament, with Martin Heath coming in as the runner-up.

Professional Squash Association’s world ranking for September 2016, with Ramy Ashour jumping from the 12th place in August to fifth place in September