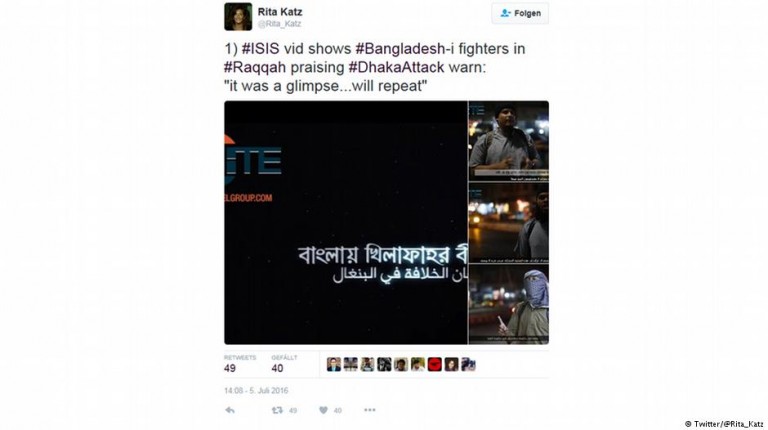 A new video released by the so-called “Islamic State” features a group of Bangladeshi jihadists who are planning more attacks in the South Asian nation. Experts say the government needs concrete plans to fight terrorism.
The “Islamic State” (IS) terror group published a video yesterday, July 5, with Bengali and Arabic subtitles that showed three new Bangladeshi jihadists announcing more attacks in the country in the coming days.

The video, which was verified by the US-based SITE Intelligence Group and Terror Monitor Group, contained clear signs that the terror group has some Bangladeshi nationals working for it.

One of the Bangladeshi jihadists shown in the video said: “what you witnessed in Bangladesh … was a glimpse. This will repeat, repeat and repeat until you lose and we win and the Sharia is established throughout the world.”

The video also appreciated last Friday’s attack on a restaurant in Dhaka that killed at least 22 people, the majority of them foreigners, from Italy, Japan, India and the United States.

Tasneem Khalil, a Sweden-based journalist who monitors online channels of jihadists, says the latest video has many alarming signals that need to be considered.

“The video essentially urges Bangladeshis to engage in an IS-led jihad in Bangladesh. This is a significant change from earlier IS’ communication in which people were encouraged to join the jihad in Syria,” he told DW, adding: “I see this as an open declaration of war against the Bangladeshi state.”

The jihadists in the video appeared to be fluent in the Bengali, English and Arabic languages. Internet sleuths have discovered the identity of two of them, while another one’s face was covered with a mask. The video was filmed beside a busy street in Raqqah, widely believed to be the capital of IS.

Arifur Rahman, a prominent Bangladeshi video blogger, agrees with Khalil on the content of the video. “Islamists are inviting others to commit the same kind of atrocities. Action therefore has to be taken against local sympathizers and safe houses in Bangladesh need to be raided,” he told DW.

A new group of terrorists

The recent attack on a restaurant in Dhaka’s diplomatic zone presented a new set of terrorists to the extremist scene of the Muslim-majority country. The attackers were from educated and elite families which surprised many people in the country. Two of the jihadists showed in the new video are also from the upper echelons of society. What turned them into terrorists became a question that everyone is asking on social media.

Siegfried O Wolf, the director of research at the Brussels-based South Asia Democratic Forum (SADF), believes that terrorist groups are now able to recruit jihadists from all social classes. “Islamists have invested much in their recruiting strategies and can reach not only poor students in madrassas but also rich ones in leading private universities,” he said.

“One must therefore think more of ways to undermine the increasingly successful propaganda strategies of terror groups,” the expert stressed.

Arifur Rahman points out that the overall atmosphere in Bangladesh is filled with religious fervor to such a high level that regular youth-related activities cannot flourish. He said: “Unregulated private universities systematically employ radicalism favoring teachers who then attack gullible young pupils with a toxic narrative of jihadism.”

“Internally acclaimed so-called Islamic preachers have a vast amount of sermon readily available on the net, this also acts as a textbook for brainwashing,” Rahman pointed out.

A number of brutal attacks on bloggers, activists, foreigners and minorities have taken place in the country over the last three years. Bangladesh was once known as a liberal and tolerant society. But the recent attacks have cast a dark shadow over the security situation.

IS, which has claimed responsibility for a number of the attacks, views Bangladesh as a strategically important country due to its geographic location. Its propaganda magazine “Dabiq” has published at least three features this year detailing the terror group’s plans to establish a “caliphate” in the Muslim-majority nation.

Still, the Bangladeshi government has denied any presence of IS on its soil, arguing that the attacks were the work of homegrown terrorists affiliated to local Islamist groups. After the Dhaka attack, however, the government said it was in favor of taking assistance from “neighboring and friendly nations” in its fight against terrorism.

Analyst Wolf says Bangladesh needs a coherent and all-inclusive anti-terrorist strategy to fight national and international terrorist organizations. Such an approach could help in getting support from foreign countries, he noted.

“Foreign countries should increase their security cooperation, like capacity building in counterterrorism and intelligence sharing,” he suggested, underlining that “they should also advise/train the Bangladeshi security forces to respect human and fundamental rights in counter-terrorism campaigns.”

Experts believe Bangladesh’s continued denial of the presence of international terror groups in the country will not help. “We have a very curious situation involving, on the one hand, a terrorist group that is openly boasting about its plans through magazine articles and now this video. And on the other hand, we have a government that is pushing those very threats under the carpet,” said Swedish journalist Khalil.

“The Bangladeshi government must immediately take robust steps to protect religious minorities and foreigners in the country – these are the key target groups of IS attacks,” he stressed.