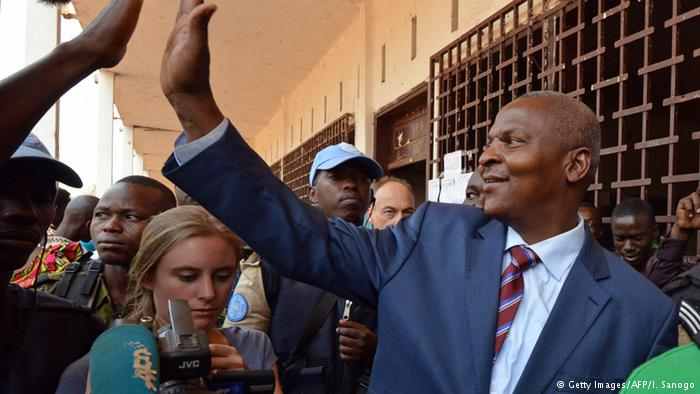 Restoring peace and security – that’s President Faustin Archange Touadera’s main task. He took office 100 days ago, but the Central African Republic (CAR) still has a long way to go before becoming a stable state.
One UN soldier killed, six police officers kidnapped and three members of the Muslim Seleka militia shot dead in the capital Bangui, all in the month of June. And outside the capital, the situation does not look any better. “The north-east and east of the country is not under government control,” said Thierry Vircoulon, a regional expert with the Institut Francais des Relations Internationales in Paris. The second biggest city, Bambari in the central part of the country also experienced fighting in early July. According to AFP, at least 10 people were killed as a result of fighting between rebel groups in the second biggest city, Bambari, in early July. “And in the west and north-west of the country, banditry is rife,” Vircoulon added.

According to Vircoulon, little has changed in the Central African Republic since the elections. But that’s not surprising, he said. “When you have an elected government that has no capacity to rebuild the army and provide basic services for the population, we should not be surprised by the fact that this government is in difficulties,” Vircoulon said.

In March 2013, the Muslim Seleka rebels overthrew the authoritarian government of President Francois Bozize. Since then, the country has been in turmoil. Violence between Seleka and Christian anti-Balaka militia constantly flares up. In fighting split the army and the transitional government under Catherine Samba-Panza stood by and watched powerlessly.

With the help of foreign peacekeeping forces, elections were held between December and February. Touadera stood as an independent candidate, but he also has close ties to the ousted President Bozize. From 2008 to 2013, he had served under him as prime minister.

Since the start of the crisis, the number of refugees has risen to nearly half a million, according to estimates by the UN refugee agency. Many live in camps inside the country, while others have fled to neighboring Chad and Cameroon. Just last week thousands of new refugees arrived in Chad.

What Touadera has tried to do with the little power that he has, is to reconcile Christians and Muslims. As if to lead by example, he was seen celebrating the end of Ramadan with Muslims in the capital Bangui.

According to Benjamin Baramoto, a DW correspondent in Bangui, the relationship between the two religious groups had indeed improved for a while: “Christians and Muslims don’t see each other as enemies anymore. Traders from both religions sit side by side at the market and talk to each other,” he said. That was in early June. Six months ago, the mood would have been tenser. In late June, however, Seleka militia kidnapped six police officers and violence erupted again.

No army to maintain order

The government, however, insists that it can restore peace and order. “The Central African democracy is slowly being consolidated,” government spokesperson Albert Mokpem told DW. Touadera, he said, has formed a new government and the national assembly has elected its chairperson. “Little by little,” he said, “things are falling into place.”

Yet the same cannot be said for the country’s army. After the 2013 coup, the army dissolved with soldiers defecting to the anti-Balaka or Seleka militia. “At the moment we don’t have an army to defend our country,” said Mokpem. All that is left is a police force.

CAR currently depends on 12,000 UN troops from the peacekeeping mission MINUSCA to maintain a certain degree of stability. France, the former colonial power, withdrew its forces after the last elections. Moreover, an arms embargo is currently in place to prevent the delivery of weapons to CAR. Yet arms are readily available and often make their way into the wrong hands. For Vircoulon one thing is clear: “There is need for a national army in CAR.” At the same time, he explained, there is currently no agreement between the government and the international community about what this army should look like.

Zeid Ra’ad Al-Hussein, the UN High Commissioner for Human Rights, has called for the militias to be disarmed. The situation is currently very fragile, he warned, and could escalate in the coming months.