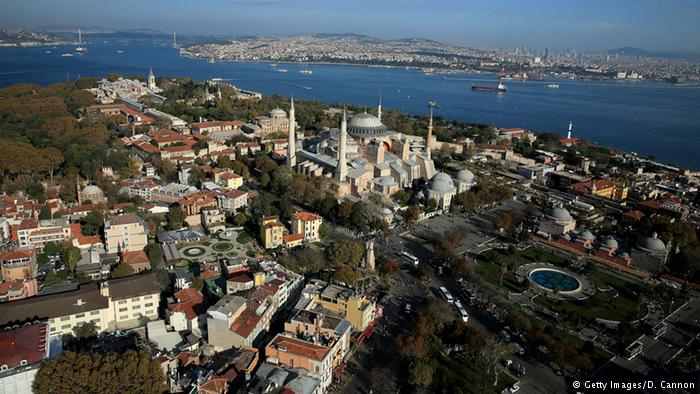 UN cultural agency UNESCO will gather in Istanbul on Sunday to review candidates to join its prestigious World Heritage List, ranging from 350-million-year old fossils to works by Franco-Swiss architect Le Corbusier.
After the June 28 attack on Istanbul’s airport that claimed 45 lives, security has been stepped up for the 11-day World Heritage Committee meeting – the panel’s 40th. Though no one claimed responsibility for the attack, Ankara has pointed the finger of blame at the Islamic State group, which has wreaked considerable damage on World Heritage sites such as the ancient city of Palmyra and the citadel of Aleppo, both in Syria. “What happened in Syria and Iraq as well as in Mali and Afghanistan were so shocking that the process of preparing UNESCO’s lists has become of great political importance,” said the body’s director general, Irina Bokova. Earlier this year IS blew up the ancient Nabu temple in Iraq. In 2012 a Malian jihadist blew up nine mausoleums and part of Timbuktu’s famous Sidi Yahia mosque. In Afghanistan, meanwhile, the Taliban destroyed the giant Bamiyan Buddhas in 2001.

Interest in threats to heritage has “grown tremendously in recent years because of these conflicts” but also new threats linked to climate change or urbanisation, she told. “Globalisation and connectivity have also seen the rise of a new spirit, a wish to present oneself to the world through one’s culture,” Bukova said. “Inscription on the World Heritage list is glorious, countries are proud.”

This year 29 dossiers are being considered by the World Heritage Committee, made up of 21 countries serving six-year terms. A dossier for the work of architect Le Corbusier, after failed attempts in 2009 and 2011, has been revamped and comes with high marks from a committee of experts who evaluate the submissions. It lists 17 sites across seven countries – France, Switzerland, Belgium, Germany, Argentina, Japan and India – to show the global reach of the work of Charles-Edouard Jeanneret-Gris, known as Le Corbusier. The creations show the contributions of Le Corbusier to the Modern Movement that emerged after World War I with an emphasis on functionality, bold lines and new materials such as concrete, iron and glass. Another architect in the same movement is also under consideration for a World Heritage nod, Brazilian Oscar Niemeyer, who laid out the country’s capital Brasilia. Brazil’s dossier wants Niemeyer’s modern ensemble of Pampulha, a leisure centre built in 1940 around an artificial lake at Belo Horizonte, to be inscribed on the prestigious list. In the same vein, the United States is promoting the works of architect Frank Lloyd Wright, but the experts’ assessment was not encouraging.

From 350-million-year old fossils to works by Le Corbusier

Other dossiers reach far back in time, one to Canada’s Mistaken Point reserve with its 560 million-year-old fossils. Cave art dating from the 5th century BC in Zuojiang Huashan in China, the dolmens of Antequera in Spain and Gibraltar’s Neanderthal grottoes are also in contention. Among natural sites under consideration are Iran’s Loot Desert and the Revillagigedo archipelago in Mexico.

The World Heritage process has often caused diplomatic friction, and this year is no exception. Thailand has proposed its Kaeng Krachan forests for listing as a cultural site, angering neighbouring Myanmar, which fired off a letter to UNESCO stating that 34 percent of the site is in its territory. For its part Britain annoyed Spain by proposing the Gibraltar grottoes, and Turkey has a dossier promoting the ancient ghost city of Ani, once the capital of neighbouring Armenia.

The World Heritage List today has 1,031 sites in more than 163 countries. The Heritage Committee will also review the status of 48 sites currently listed as “in danger”. Seven more sites have been proposed to be added to this list, including the Kathmandu valley, which suffered a devastating earthquake last year.

Apart from the prestige it accords, it can be a boost to tourism as well as a means for poorer countries to receive financial aid to preserve their sites.

How a location can become a UNESCO World Heritage Site