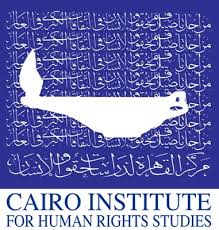 The Cairo Institute for Human Rights Studies (CIHRS) released a press statement Thursday outlining some of the content of the Human Rights Council’s 32nd session dialogue on freedom of assembly and association, during which it presented a statement on 7 June.

CIHRS said it referred to “calls made by UN experts in the last two months for the Egyptian authorities to cease curtailing public freedoms”, calling on Egypt to close the NGOs foreign funding case and to “drop all charges against rights defenders and organisations”.

“The reopening of case No 173 of 2011, known as the foreign funding case, will most likely end with the sentencing of human rights defenders including life sentences in prison, and the shutting down of rights organisations. The repressive actions to close public spaces and crackdown on dissent in Egypt are extremely alarming,” CIHRS said in a statement delivered jointly with 10 Egyptian human rights organisations.

The NGOs included Nazra for Feminist Studies, whose director Mozn Hassan and staff were summoned for investigations, as well as the Egyptian Commission for Rights and Freedoms, from which researcher Mina Thabet was detained from May to June 2016.

CIHRS further mentioned the cases of human rights activist Ahmed Abdullah and lawyers Haitham Mohamadain and Malek Adly; the latter has remained in solitary confinement for over a month. There was also mention of travel bans on human rights workers and asset freezes of employees of rights NGOs.

The 32nd session took place between 3 June and 1 July. The UN Special Rapporteur on freedom of assembly and association expressed concern about restrictions on civil society and human rights organisations, reporting that he has been following up on several cases such as the former short detention of Hossam Bahgat and the current imprisonment of the Beladi Foundation members.

The Special Rapporteur said that the NGO Law (84/2002) has been utilised “arbitrarily against organisations that seek to carry out peaceful and legitimate human rights activities or express dissenting views,” calling on the Egyptian government to end the travel bans and licensing restrictions. There were also concerns expressed over the attempt to shutdown El-Nadeem Center for the Rehabilitation of Victims of Violence.

Egypt’s reply to claims made by other countries – which strongly condemned restrictions on the civil society during the session – rejected attempts to interfere with its rules regulating NGOs and denied any claims of enforced disappearance.