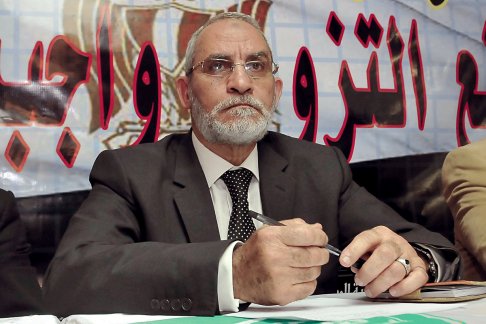 The health condition of the Muslim Brotherhood’s supreme guide Mohamed Badie has deteriorated. He was transferred to Al-Manial Educational hospital in Giza.

A lawyer close to Badie told Daily News Egypt on condition of anonymity that the Brotherhood leader suffered a circulatory failure on Friday and has been receiving treatment. However, the lawyer cannot confirm the severity of the supreme guide’s condition.

Meanwhile, the Ministry of Interior media office could not confirm or deny the incident. When contacted on Saturday, the head of the prison department in the ministry General Hassan Al-Sohagy refused to comment or give information about the incident.

On Saturday, the family of Badie said in a statement published online that they do not have clear knowledge about the status of their relative. The family denied giving any press statements.

The statement added that: “What has been published is worrying… and we hold the coup officials responsible for the health of the supreme guide.”

Badie’s family said that it had been banned from visiting him in Torrah prison during the Eid holidays and for the past two weeks.

The same complaints were repeated by the families of other Brotherhood leaders such as Safwat Hegazy, Bassem Ouda, and Osama Yassin.

Badie, along with several senior Brotherhood members, is standing trial in several cases since the ouster of former president Mohamed Morsi in 2013. Badie has previously been sentenced to death in four different cases.