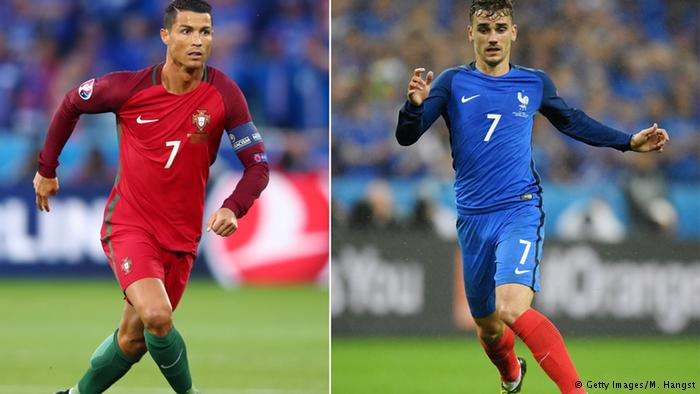 France and the in-form Antoine Griezmann go in to Sunday’s Euro 2016 final searching for the country’s third successive tournament win on home soil. But Cristiano Ronaldo and his Portuguese teammates stand in their way.
After their Euro 1984 and World Cup 1998 wins, French coach Dider Deschamps, who captained the World Cup winning side as well as the one which won Euro 2000, leads a side who are strong favorites to lift the trophy. But he admits to being concerned about the influence of Portugal’s captain.

“If there’s an anti-Ronaldo plan, no-one’s found it,” Deschamps, who has a fully fit squad to choose from, told a press conference at Stade de France near Paris on Saturday.

“He’s a really great player with athletic quality, particularly in the air. He really hangs in the air — those chocolate squares (abdominal muscles) don’t count for nothing.

“In football, the most difficult things to fight against are pace and aerial ability. It will be important to remain attentive and restrict his influence.”

Ronaldo started the tournament in subdued fashion, much like his team, but has improved, culminating in a match winning display against Wales in the quarterfinal, where he scored the first and made the second in a blistering three minute spell that knocked Wales out.

But France have their own emerging superstar to call on. Antoine Griezmann, who scored a brace in France’s semifinal win over Germany, looks a near certainty for both the Golden Boot and Player of the Tournament but Deschamps said he isn’t yet on Ronaldo’s level.

“Antoine is still a young player, even if he has had a very great season. Ronaldo has been at the summit for seven or eight years. There are two men in for the Ballon d’Or – it’s between him and Messi,” he said.

Griezmann is a certainty to play, though his starting position is less clear. Deschamps started the tournament with three central midfielders and Griezmann and Dimitri Payet in the wide positions in a 4-3-2-1.

Deschamps was forced to tweak his formation when holding midfielder N’Golo Kante was suspended for France’s quarterfinal win over Iceland. Kante did not return for the semifinal as Deschamps stuck with Moussa Sissoko on the right hand side and Griezmann through the center of a 4-2-3-1 but, after Germany’s dominance of possession in the first half on Thursday, the France boss has something of a selection quandry.

Portugal coach Fernando Santos also has a decision to make, with Real Madrid center back Pepe fit again after a thigh complaint forced his absence from the win over Wales. The Brazilian-born 33-year-old is likely to replace Bruno Alves.

More than just a final for the hosts

Confidence in the French camp is high, with their win against Germany confirming their improvement in the knockout stages after a shaky start. For goalkeeper and captain Hugo Lloris, the side’s run to the final has given the country “an escape” after the horror of last November’s Paris attacks that left 130 people dead.

“We’re even prouder to be on the pitch (than normal), to feel the entire French population behind us, to feel this happiness which is shared between the players and the French people,” the Tottenham Hotspur stopper said.

“That gives us strength and is lovely to see. But we still have that final step to take to finish this competition in the best possible fashion. The French people really needed to escape via this competition, and sport has this strength: to unite people.

“We are currently experiencing that. We still have one step to take, the hardest one, but one that’s worth it.”

The final kicks off at 9pm CET at the Stade de France, just north of Paris.

Euro 2016: Teamwork and drama make up for footballing shortfalls

France left flat after Portugal spoil the party in Paris

Euro 2016 final: Midfield battle between Sanches and Pogba could be crucial

France surges toward Paris ahead of home final against Portugal

Euro 2016: Portugal v Wales is so much more than Ronaldo v Bale

Opinion: Teams not stars steal the show at Euro 2016

Euro 2016: Takeaways from the quarterfinals