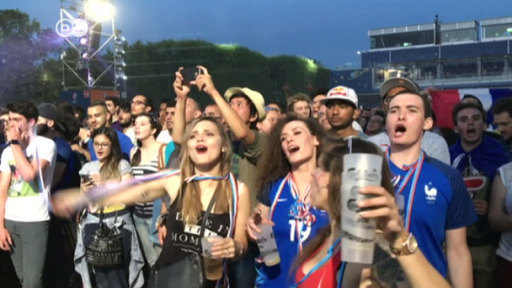 It all started against Iceland, before erupting against Germany. Faith in the French team has reached an all-time high and now Paris expects them to deliver ultimate glory on Sunday.
It always felt like it was going to be their tournament – and it still does.

In 1984, the flamboyant Michel Platini led France to success in the newly built Parc de Princes. In 1998, this time in the brand new Stade France, it was Zidane uniting the French people in front of the world. It doesn’t feel like 2016 can be any different.

“Everyone is behind the team, we all have our flags out. We are electrified,” said one fan on the streets of Paris the day after their historic semifinal win over Germany.

The football hubs of Marseille and Lille have generated a current of support now flowing around France, powering its capital ahead of Sunday.

The anticipation became palpable on Saturday, with signs of support even creeping in to the usually-aloof well-heeled districts. The newspapers were dominated by the moment Sunday promises to be.

‘Libération’ said that after beating Germany in the semifinal, the sheer hope of winning the trophy has already healed the wounds of a French society tormented with fear, albeit temporarily. “Le Monde’s” weekend edition took a more romantic approach, stating France now had “Le Droit de Rěver” (The right to dream).

Such a situation didn’t always seem likely though, particular not in Paris. It took a quarterfinal thumping of Iceland to fully turn the tide of public opinion. Of course, France were the favorites but they scored five, quickly won over a famously impatient Paris crowd and were suddenly in the final four.

Support began to spark all across the nation. With a bit of luck and Antoine Griezmann bursting into form, the connection surged when France beat the world champions on Thursday. The pandemonium that followed was quite something.

Now, almost everyone on the streets of Paris is sure of victory.

“We have played better in this tournament than Portugal. Our chances of winning are greater,” said a bar keeper at the IPN bar.

You have to do more than play well – as Germany found out – but looking at the way support has grown for the French, it’s hard not to believe they’ll win.

“The atmosphere has grown with the results. The further France has gone, the greater the euphoria. Now, the French people are happy with their team and they have something to be proud of,” said an elderly Frenchman on the streets of the fifth arrondissement.

A group of teenagers playing football on the street near the Pantheon are confident their heroes can overcome Cristiano Ronaldo on Sunday. Can one man really stop an entire nation? After the last 12 months France have had, it’s hard to think the sheer will of over 66 million people won’t crown them winners on Sunday. The deflation of defeat isn’t even worth considering.

France left flat after Portugal spoil the party in Paris

Opinion: Teams not stars steal the show at Euro 2016