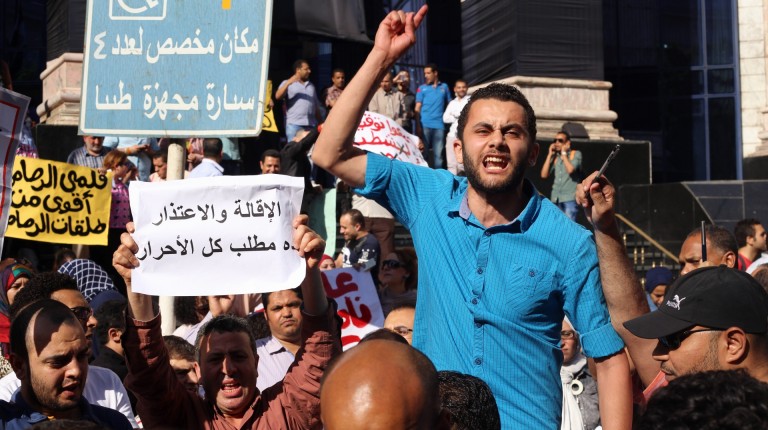 Meanwhile, eyewitnesses provided conflicting testimonies at court on Saturday during the trial of Press Syndicate leaders, according to lawyer Tarek Nagida.

“The court heard the testimonies of the syndicate’s security staff, which surprisingly contradicted what they previously stated in interrogations conducted by prosecution authorities,” Nagida told Daily News Egypt Sunday.

Nagida, the defence lawyer for Press Syndicate president Yehia Qalash, secretary-general Gamal Abdel Reheem, and head of the Freedoms’ Committee Khaled El-Balshy, explained that the security chief could not provide accurate information on the sit-in of journalists Amr Badr and Mahmoud Al-Saqa despite the “judge using his legal right in reminding the eyewitness of his previous statements”.

The court further heard another security staff member. Nagida said he could not reveal further details of the trial but claimed that “similar things happened with his testimony”.

The incident dates back to 1 May, when police forces stormed the syndicate on grounds of arresting the two journalists, claiming that they were enforcing the law after the prosecution issued an arrest warrant against the two.

The move was widely condemned by the press community and was followed by protests against what journalists described as an unprecedented assault on the press and on the syndicate. Badr and Al-Saqa face charges of inciting protests and attempting to overthrow the regime.

None of the syndicate members currently facing trial were present when the break-in occurred. Abdel Reheem and El-Balshy were out of the country. They returned the next day upon hearing the news and attended demonstrations of journalists against “assaults of the Ministry of Interior”, during which they demanded the resignation of minister Magdy Abdel Ghaffar.

A few days later, several pro-government journalists—including MP Mostafa Bakry and editor-in-chief of the mega Al-Youm Al-Sabaa newspaper, Khaled Salah—changed their stance against the ministry, instead leading fierce campaign against the syndicate and its council members, especially those known for being opponents of the ruling regime.

Waleed Sayed was one of the security guards who witnessed the events. Nearly a week later, he spoke to Bakry on his show aired on Sada El-Balad satellite channel.

“Around 8.20pm, a man in [police] uniform came to the syndicate under the pretext of using the ATM machine, but I refused to let him onto the grounds stating it was only for journalists’ use,” Sayed said. “At 8.30pm, there were knocks on the syndicate’s door. Then nearly 10 security men pushed through the door. I repeatedly tried to ask them what they wanted but they ignored me and went in,” he continued.

Sayed added that the men targeted a group of journalists who had been staging a sit-in at the syndicate and asked them for their IDs but the journalists refused. “As so, they went looking for Badr and El-Saqa who were staying on the ground floor, and took them away,” he said.

In response to questions by Bakry, Sayed said he was not assaulted by the security visitors, but that he was “forced” to sign a memorandum to be sent to Qalash stating he was attacked.

Yet, according to Nagida, security members contradicted these stories at court.

Another security member named Mohamed Hussein, according to copies of investigations published in local media, claimed that Badr and El-Saqa were arrested on the syndicate’s fourth floor.

Among different inaccurate claims by security members, the administrative manager of the syndicate’s building, Amr Ibrahim, expressed surprise at the “security members’ changes of stance and denial of the police break-in”, local media reported, adding that Ibrahim claimed to have been informed by Hussein that nearly 30 to 40 security officers broke into the syndicate and that there was no pressure whatsoever to make them sign an account of what happened.

The Press Syndicate leaders were accused of hiding wanted suspects inside the syndicate amid ongoing investigations with the two detained journalists.