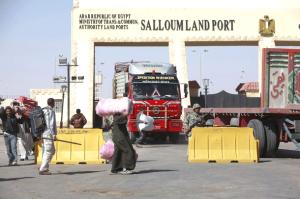 The Armed Forces announced on Monday its successful rescue of the six Egyptian citizens who were abducted in Libya a few weeks ago, with the six citizens allegedly arriving at the Salloum border.

Citing sources, the privately-owned Al-Youm Al-Sabaa said that the citizens were abducted by militants, contradicting an official statement that was released by the Foreign Ministry on Saturday that said they were detained by municipal authorities in the city of Bani Walid.

The media office of the Armed Forces confirmed to Daily News Egypt that the Egyptians were abducted by militants, and the previous statement was inaccurate.

“The Armed Forces intervened to save the abducted citizens after they were stopped by militants on their way back to Egypt,” they said.

An earlier statement by the Foreign Ministry listed the names of the abducted citizens, which included two siblings, as follows: Shawky Ali, Saleh Younis, Al-Sayed Ramadan, Al-Sayed Al-Shahat, and Ahmed Al-Shahat from Mansour, and Ibrahim Hefzy from Minya.

The ministry also reiterated its warning about travelling to Libya due to the unrest there.

In March, another 15 Egyptians disappeared in Libya. Official sources claimed that they were detained at an illegal immigration centre on grounds of invalid paperwork. However, their families claimed that they had been kidnapped by militia. They were later released.

Several cases of Egyptians being kidnapped in Libya occurred over the past few years amid intensified clashes between the two warring governments in Libya. These clashes allowed Islamic State in Libya to take control over large swathes of land.

Pro-government soldiers killed in clashes with ‘Islamic State’ in Libya