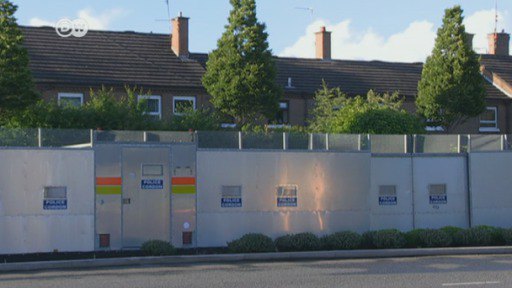 Tradition holds that in 1690 fires were lit along the coast to help King William of Orange navigate safely to Belfast. Those conflagrations are still commemorated today. Peter Geoghegan reports from Belfast.
Monday’s annual July 11 bonfires had a new addition this year: alongside the Irish Tricolours and election placards for republican and socialist parties, some of the vast piles of wood and tyres sported the starry standard of the European Union and pro-Brexit signs.

Last month, 56 percent of voters in Northern Ireland chose to remain in the EU, but many working-class Protestants supported leaving.

“I voted out. Our health and education services are at an all-time low. I’m a big believer in looking after yourself first,” says Alfie McCrory, chairman of the Twaddell and Woodvale Residents Association, in North Belfast. His brother, Sammy agrees, citing the decline of Belfast’s once buoyant shipyards.

Sammy McCrory is a member of the local branch of Protestant fraternity the Orange Order. Every year on “the Glorious Twelfth” thousands of Orangemen draped in sashes take to streets across the country to remember the victory of the Protestant King William over the Catholic King James.

In recent years, Twaddell has become the most significant flashpoint. Since 2013 a permanent encampment at Twaddell has protested a ruling that local Orange lodges cannot return past a row of shops in the nearby predominantly republican Ardoyne. Policing the small circle of caravans and loyalist banners has cost an estimated £21 million.

Early on Tuesday morning, as around 100 republican demonstrators gathered, the atmosphere was more of weary resignation than impending violence. A group of residents held a banner that read “Resolution is possible” while heavily armored police looked on as the Orange parade filed past.

The marching season “is getting quieter and quieter as time goes on,” says Gerry Kelly, Sinn Fein member of the Northern Ireland assembly for North Belfast. Although violence has practically ended since the signing of the Good Friday Agreement in 1998, the former senior IRA figure warns that the UK’s decision to leave the European Union could have a significant negative impact in areas such as Ardoyne and Twaddell.

“The big damage will be is that we had access straight into funding streams,” Kelly told DW. “It is going to be much harder for people in the north to get money out of Westminster than Brussels.”

Just a few miles away, on the overwhelmingly republican Falls Road murals of hunger strikes and international solitary look down from the gable ends of tightly bunched terrace houses. Thousands of people from the area spent time in prison during Northern Ireland’s 30-year-long ‘Troubles.’

Like many Northern Irish community groups, Coiste na n-Iarchimi, which works to re-integrate former republican prisoners, is heavily reliant on European funding. Earlier this year, the EU approved a multi-million-euro funding stream for Northern Ireland to run until 2020. Now there is uncertainty about the future.

“What will Brexit mean for peace work?” asks Coiste spokesperson Michael Culbert. “We had a period of roughly 20 years when we didn’t have a conflict. Could we have a new generation now?”

Few Orangemen see cause for concern about the future of Europe in the wake of the Brexit vote.

“The vast majority of members would have voted to leave, mainly to do with sovereignty issues,” says Reverend Mervyn Gibson, assistant grand master of the Orange Lodge. “But we are too far down the road to go backwards. I don’t see (Brexit) making a big difference.”

Not everyone agrees, however. Writing in the New York Times recently, Sinn Fein President Gerry Adams said Brexit could pave the way for a united Ireland.

From the opposite side of the political spectrum, senior loyalist Winston Irvine, warns that leaving the EU will have a “negative influence” in Northern Ireland.

Irvine noted that the European Union had been instrumental in enforcing progressive social policy in traditionally conservative Northern Ireland. He also suggested that leaving the EU could jeopardize the future of the UK itself, given renewed calls for a referendum on Scottish independence.

In a better place?

“As a committed unionist I believe that the vote to come out of Europe has the potential to seriously undermine the whole union given the fractured body politic across the United Kingdom,” Irvine told DW.

While Tuesday’s daytime parades, and the bonfires the previous night, passed off peacefully, they were not without incident. An Ulster Unionist MP was photographed posing in front of a bonfire with an Irish flag placed atop it and a banner declaring ‘no surrender.’

“In 2016 we are in a better place,” says Jonny Byrne, lecturer in criminology at the University of Ulster. “But success is still measured by the absence of violence as opposed to creating positive outcomes. Our benchmark is pretty low.”

The European Union played a key role in the Northern Irish peace process by providing freedom of movement, human rights legislation and funding. Now all that is under threat, Byrne told DW.

From victim to survivor: a foundation for peace