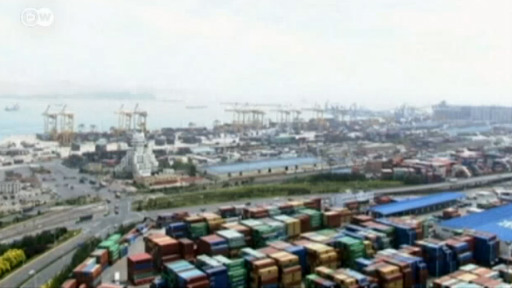 Chinese imports and exports in dollar terms dropped sharply in June as the country’s currency depreciated against the US currency. Falling commodities prices and weakening domestic demand also played a role.
China’s trade slipped in June as soft demand at home and abroad continues to weigh on the world’s largest trading nation. In US dollar terms, overseas shipments fell 4.8 percent in value from the same month a year earlier, while imports dropped 8.4 percent. The country’s trade surplus also edged slightly lower to $48.11 billion (43.5 billion euros).

Last week, China’s currency posted a fifth straight drop – the longest losing streak this year – and an indication that the country’s rulers aim to weaken the yuan further to boost exports.

The General Administration of Customs, which released the data on Wednesday, attributed the fall in import values to weakening commodity prices. “The input volume of major bulk commodities such as iron ore, crude oil and copper maintained growth,” it said in a statement, adding that prices for them remained “low with a narrowing price decline.”

Customs also said there were “obvious obstacles” blocking China’s foreign trade development, particularly the decline in business in both directions with major trading partners such as the US and southeast Asian countries.

In the first half of this year, China’s imports and exports both fell in yuan terms, by 4.7 percent and 2.1 percent respectively. The country’s growth has been slipping for months and is expected to hit a multi-year low of just 6.6 percent in the second quarter, slowed down by manufacturing overcapacity, a slowing property market and mounting debt.

Customs spokesman Huang Songping told reporters that especially China’s exports were facing downward pressures in the third quarter amid uncertainty over Britain’s exit from the EU, expectations of rising interest rates in the US, terrorist threats and weak global demand.

“The domestic economy has been operating steadily but downward pressures have continued to increase. Companies’ costs have remained high and some industries and orders have been shifted abroad,” he said.

Iris Pang, senior economist for Greater China at Natixis SA in Hong Kong described the Chinese trade figures as very weak. “I don’t think there will be a significant improvement and I expect heavier and speedier fiscal stimulus in the second half,” she told the news agency Bloomberg.

Economist Tom Orlik and Fielding Chen also think China’s policymakers will continue along a path of weakening the yuan against the dollar in support of exports. “Yuan weakness has bolstered competitiveness and prevented a sharper slide in overseas sales. In the immediate future, though, the central bank may be forced to lean against excess depreciation pressure,” they wrote in a note.