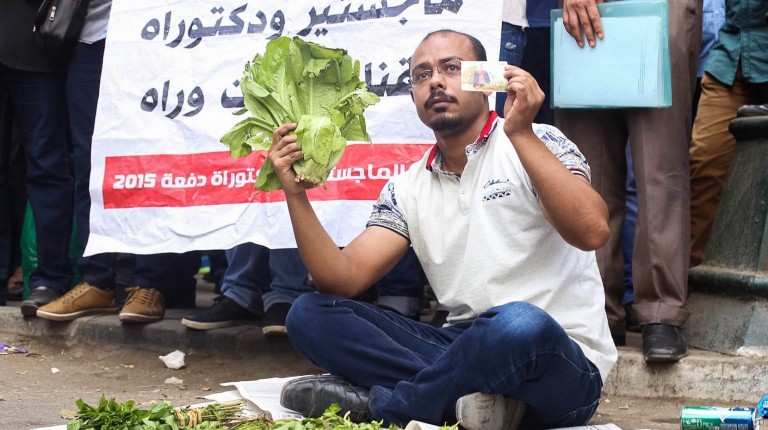 Security forces released on Wednesday at dawn some 18 Master’s and PhD holders who were briefly detained following their arrest on Tuesday at a protest to demand employment by the government, a post-graduate told Daily News Egypt on condition of anonymity.

The police dispersed the protest and escorted the group of post graduates to Qasr Al-Nil police station. The post-graduates were released after the head of the Lawyers Syndicate, Sameh Ashour, sent a defence team to represent them at the police station, he added.

Some media reports claimed that some post-graduates were injured, and some even fell into a coma, during the dispersal of the protest.

In recent months, these post-graduates have organised more than 45 rallies, amid state negligence. Several protesters were briefly detained at these rallies.

In late May, the State Council decided to grant Master’s and PhD holders from both private and public universities the right to a job. This decision came following the continued effort of post-graduates to make their demands known.

The cabinet should have signed an approval on the State Council’s decision but it has been pending in the cabinet headquarters for more than a month so far, the post-graduate said.

In December 2015, security forces dispersed a protest and arrested several people, including the protest coordinator, after giving a one-hour warning to end the protest.

In June, the scheduled thanaweyya amma (secondary school) final exams were leaked and have therefore been postponed. Many students protested against the postponement and rescheduling, and were briefly detained.

Similarly in September 2015, teachers and students demonstrated at the Press Syndicate against the education minister, while technical school students protested against the minister of higher education, with several demands related to improving the education system.

Former interim president Adly Mansour issued the controversial Protest Law in November 2013, which requires prior security approval before holding any assembly for more than 10 people. Hundreds of people have been arrested since the law was passed, including some who were convicted by the authorities.