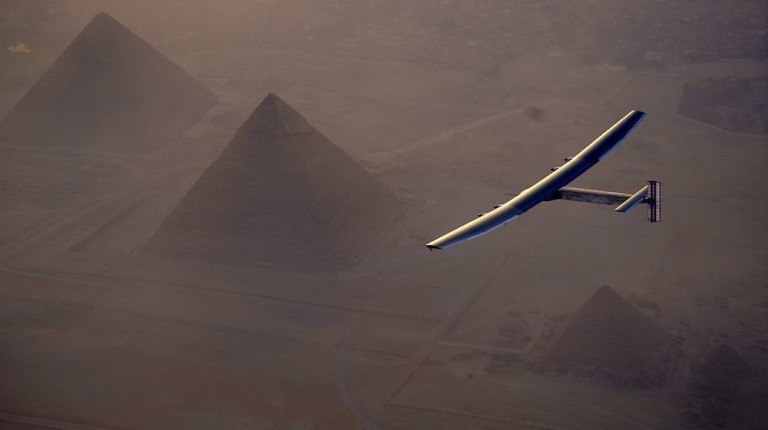 Pilots André Borschberg and Bertrand Piccard circled the aircraft over the pyramids before landing at Cairo International Airport.

“The final approach to #Cairo was a bit tough but I made it: my last flight of the adventure!” Borschberg tweeted.

“In Egypt in 1999 I had the vision of solar impulse after my [hot air] balloon [round-the-world trip]. Seventeen years of dreaming and hard work later, SI2 landed in this country,” Piccard said on his Twitter account.

The aircraft and crew were greeted by Minister of Civil Aviation Sherif Fathy and the UAE ambassador to Egypt Joma’a Mubarak Al Junaibi.

The ministry had released a statement on Tuesday afternoon saying that Fathy and everyone working in the civil aviation sector are proud to host this event and receive the aircraft.

Fathy also said that this showed the government’s endorsement of using solar energy for civil aviation and moving towards cleaner sources of energy.

SI2 started its journey around the globe in March 2015, and has stopped in Oman, India, China, and Hawaii.

FOSTEr-ing solar technology in the Mediterranean area: an EU success story completed in Egypt through the FOSTEr in MED Project