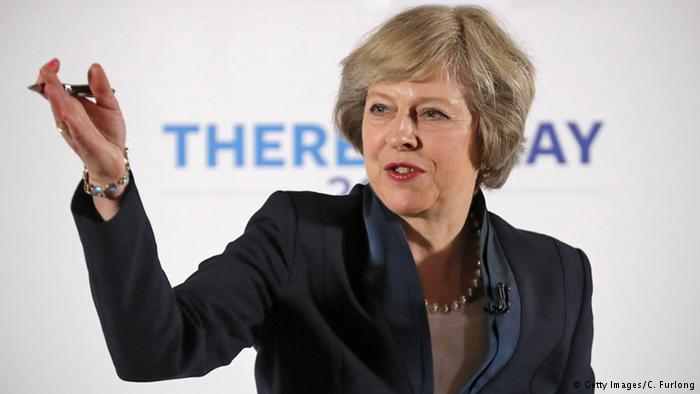 Britain’s new prime minister Theresa May has scrapped the UK’s climate ministry and appointed a climate skeptic as environment minister. In a post-Brexit world, Europe’s climate protection policy could be in trouble.
Over the past decade, the United Kingdom has been one of Europe’s most progressive forces in tackling climate change. But all that appeared to change this week.

Theresa May, the post-Brexit prime minister who took charge on Wednesday (13.07.2016) after the resignation of David Cameron, has decided to eliminate the UK’s Department of Energy and Climate Change (DECC). Serving under a dedicated minister, the department has since 2008 been one of the most active in Europe pushing for carbon dioxide emissions reduction.

May is dismantling the department and folding the responsibility for these two areas into a “Business, Energy and Industrial Strategy” department which will be led by Conservative MP Greg Clarke.

Criticism of the move has been fast and furious. Ed Milliband, the former leader of the opposition Labour Party who himself served as the first Energy and Climate Change Secretary in 2008, said the move was “just plain stupid.”

Caroline Lucas, the leading MP in the UK’s Green Party, said the move is “deeply worrying,” and that climate change will be forgotten without a dedicated minister in the UK government.

Stephen Devlin, an environmental economist at the New Economics Foundation, said the decision “signals a troubling de-prioritization of climate change by this government [and is] a staggering act of negligence for which we will all pay the price.”

Asked by reporters whether the move means climate change issues have been downgraded, a spokesperson for May said the government “will be continuing to meet our international commitments.”

Separately, May appointed Andrea Leadsom, her former rival for the leadership, to be the UK’s new environment secretary. Leadsom is known as a climate skeptic, having famously questioned whether climate change is real on her first day as UK energy minister last year.

The move has further alarmed European climate activists, who were already worried about the impact of Brexit, the UK’s impending exit from the EU that voters narrowly decided in a public referendum on June 23.

Brendan MacNeil, chair of the UK parliament’s energy and climate change committee, said he is “astonished” that May would take this decision at a time when there is huge uncertainty about the future of efforts to tackle climate change in the UK.

Since the passage of the UK’s Climate Change Act in 2008, which created DECC, the UK has been at the heart of driving climate ambition in the European Union. Though the act was passed by former Labour Prime Minister Gordon Brown, Conservative Prime Minister David Cameron embraced the policies upon taking office in 2010.

The UK government has been cautious on EU environmental policy such as conservation laws and air pollution limits, and it has resisted EU efforts to coordinate energy policy, objecting over sovereignty.

But it has been a leader on climate, pushing the EU to adopt a more ambitious emissions reduction target than the 40 percent reduction by 2030 agreed by EU leaders.

Cameron was instrumental in forming the “green growth group,” a bloc of 13 climate-ambitious EU countries which also includes Germany, France, Denmark and Spain. The UK was particularly useful in convincing climate-cautious countries such as Poland and the Czech Republic of the need for emissions reduction commitments.

“The UK hasn’t been positive on all fronts in this file – but for greenhouse gas targets, they’ve played a strong role,” Wendel Trio, the director of Climate Action Network Europe, told DW.

“They have been one of the countries that have consistently spoken out for more ambition in the 2020 and 2030 targets,” Trio added. “It will be a challenge for other progressive countries to take over part of that role and take over the voice that the UK had in the EU.”

Jill Duggan, the director of the platform that coordinates the green growth group, told DW that even if the UK is no longer a member state, she hopes it can find a way to be affiliated, similarly to the relationship that Norway has with the group now.

“The Brexit scenario has caused a lot of uncertainty for governments and companies – but what is certain is that whether it’s the EU, COP, the G20 or something else, we have to find ways of working together and collaborating,” she said.

A Brexit will not only create a leadership vacuum on emissions reductions – it will also create a burden-sharing vacuum. The EU’s 40 percent target, pledged at the UN climate summit in Paris last year, applies to the entire bloc rather than to individual countries.

This means that once the UK leaves the EU, it will no longer be bound by the Paris Agreement. It would need to sign a new bilateral emissions reduction pledge with the UN.

The burden of meeting the 40 percent reduction was to be split among the 28 EU member states, with different countries contributing varying amounts based on their ability and wealth. As a large, wealthy country, the UK was expected to shoulder a large part of this burden.

“If the UK leaves, their share will have to be compensated by others – mostly by those in the middle range,” said Trio. “Italy, Spain and Portugal will have to do more.”

Under UN rules, the EU is not allowed to revise down its Paris commitment in light of Brexit.

The European Commission is due to come out with an effort-sharing proposal on Wednesday (July 20). Although there had been talk of delaying publication because of Brexit, commission sources say the EU executive is sticking to this date because there is no sense in waiting.

They will release figures for all 28 countries, even though they will have to be revised after a UK exit.