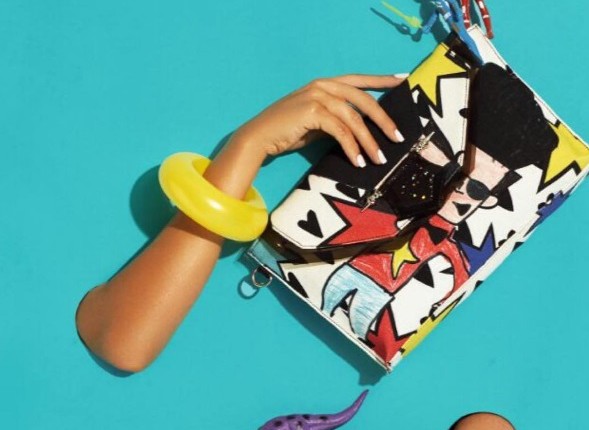 As summer approaches, many look to discover new destinations while others choose to go back to their favourite childhood activities. Nostalgia might be a notion that can come by any day throughout the year, but it is definitely a frequent summer companion.

For an entire generation, summer was spent watching and sketching fictional cartoon characters. Long before the internet and cable TV, colouring pens and papers were an activity that could consume days and months of summer heat.

Aya and Mounaz Abdel Raouf, founders of Okhtein, have once again blurred the lines between art, fashion, and personal experience. After narrating stories of friends and family in their first scarf collection, the ladies have once again managed to fashionably introduce a personal element in the most wearable and contemporary way.

Future Nostalgia is the sisters’ latest summer collection that is based on everyone’s favourite cartoon characters. Despite the founders’ well-known artistic skills, the Abdel Raouf sisters collaborated with a number of artistic children to provide the images, giving a unique twist to the reminiscent theme.

“We gave children several illustrations of iconic cartoon characters from our childhood, but with a twist. We removed several parts of the cartoon characters and allowed the children to complete the image based on their perceptions and imaginations. We wanted to play around with ‘old v new’ in a fun and nostalgic way. Hence, the title ‘Future Nostalgia’,” said Aya.

With that said, the collection comes with an educational initiative that aims to spread artistic awareness among children.  “Our summer capsule collections always help our society. Last year, we collaborated with women from different non-governmental organisations (NGOs)and villages to support the empowerment of women. This year, we decided to collaborate with children. We worked with several art centres, orphanages, and NGOs,” said the founder.

The participating entities included the Egyptian Autistic Society, ArtsMart, and Educate-Me. The fashion label announced their concept via social media a few months earlier, encouraging kids to send their personal takes on the theme. “The participating children were between the ages of eight and 12. More than 70 children were involved, but we chose the ones whose art stood out to us,” said Aya.

In spite of the numerous submissions, the sisters carefully went through each and every sketch to develop the final designs. The girls did not have specific criteria in mind. However, they searched for the sketches that would stand out, make them giggle, and remind them of their childhood fantasies.

According to Aya, none of the selected sketches were modified. The designers only added digital illustrations as background shapes and patterns. Not only did the designers preserve and showcase the children’s art and talent, but they also added the name of each child to his/her design.

The results brilliantly manifest the beauty and freshness of young talent, especially when guided by one of the country’s most skilled designers. Meanwhile, this collection stands up against various stereotypes regarding art education, and autism in particular.

“We are still in the process of sharing the final images with the children. Some parents and their relatives were really happy, congratulating the children on the Instagram posts,” said Aya.

With that said, the intellectual and creative credits are not the only gain for the participating children and entities, as the designers plan to donate a share of the proceeds to support the organisations that were involved.

In Video: Boggy and Tamtam reappear.. bringing back nostalgia

On selling out, censorship, and nostalgia: Rappers reflect on society