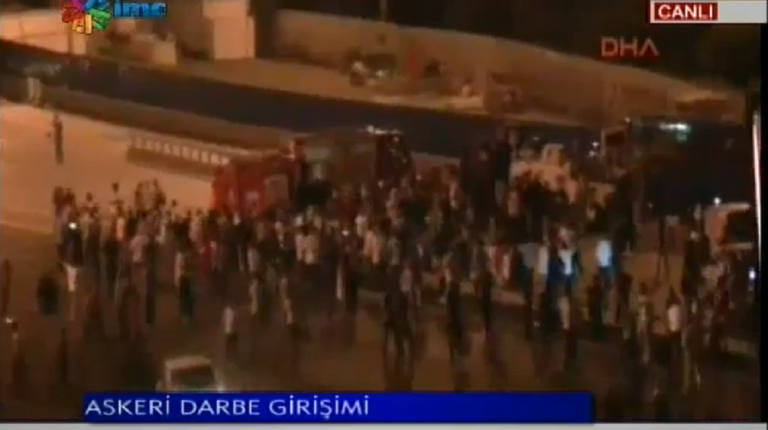 Hours after the Turkish army had declared taking over the country, supporting and opposing protesters took to the streets in the early hours of Saturday, with no reports of clashes between both sides.

State-owned news agency Anadolu reported that a military helicopter had shot missiles at the headquarters of the police in Ankara, killing 17 police officers. Sounds of fighter jets could be heard in the capital.

The fate of the army chief of staff, who has been arrested by the army, is still unknown.

Nevertheless, the first army commander stated that “there is no cause for concern”, and that the rebellion has been staged by a small number of soldiers.

Turkish president Recep Tayyip Erdogan made a statement late on Friday, commenting on the coup attempt underway in his country. He described the occurrence as an action by an army minority, as he urged the Turkish people to convene at public squares. He asked Turks to resist ongoing coup by followers of preacher Fethullah Gulen.

The Turkish president vowed coup plotters would not succeed.

Elements of the Turkish military have taken control of major institutions in the Turkish capital Ankara, including the army general staff headquarters and the state TV headquarters. Military jets have been reported flying on low altitude over the capital. before a statement from the Turkish prime minister Binali Yildirim said a “small group” from the army attempted to stage a coup and gain control of the country.

A statement attributed to the Turkish army said it has taken power over the country, reported Turkish TV.

The president’s statement came via a mobile phone, and it was not clear whether it was made from the presidential palace.

Yildirim, as reported by Anadolu, also stated that the Turkish government is still in control, amid reports of gunshots and the closure of Bosphorus and Fatih Sultan Mehmet bridges in Istanbul.