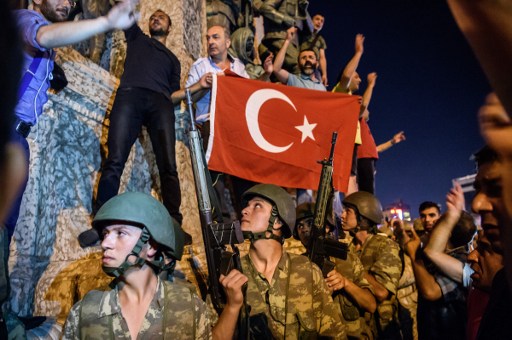 Footage arrived from international and regional media outlets and agencies showing Turkish soldiers raising their hands towards the sky as a sign of surrender and the end of their attempted coup.

Despite confirmed news sources proving the failure of the military coup in Turkey, several private and state-owned Egyptian media outlets have insisted that the military coup attempt executed on Friday evening against Turkish President Recep Tayyip Erdoğan ended in success.

A number of privately owned media outlets and prominent media figures operating popular talk shows did not hesitate to show their support for the military coup in a way that clearly violates objective reporting.

Several reporters, instead of displaying real news in an unbiased way, convinced Egyptians that the coup succeeded and urged viewers and listeners to follow and believe only this news, and not any other media.

State-owned channels paid great attention to what was happening in Turkey on Friday night, unlike the coverage provided by the same channels proceeding the 25 January Revolution. Friday’s coverage included the engagement of several political affairs experts over the telephone and in live interviews through which they asserted to Egyptians that what was happening in Turkey was not a “military coup” but a “revolution”.

Others claimed through privately-owned channels that the reasons behind this military uprising were bad living conditions for Turkish citizens, inappropriate policies executed by the Turkish president against the current Egyptian regime, or that Turkey was becoming a Muslim Brotherhood-run country.

Ahmed Mousa, a prominent TV anchor with a daily show on privately-owned channel Sada El Balad, mentioned on his talk show that Erdoğan remaining in power poses a great danger to the safety of the Middle East and the entire world. He asked Egyptians to show support for the “military revolution” as he called it, denying that it was a coup.

Later, following updates, Mousa moved from describing the event as a revolution led by the military and instead referred to it as an “ousting trial” that may witness success or failure, hoping at the end of his episode the military would seize power in Turkey.

Khairy Ramadan, a prominent TV anchor who presents a famous talk show on the privately owned channel CBC, also considered the military movement as a “revolution” and “revenge” for policies adopted by Erdoğan against Egypt during the 30 June Uprising.

Similarly, Youssef El Housiny, who hosts a talk show on a privately-owned TV channel, expressed his happiness following news of the coup in Turkey saying through his Twitter account that the removal of Erdoğan will put an end to terrorism caused by Islamic political entities.

Print media was not so different from what was broadcast. Headlines and front pages of several newspapers, both privately owned and state-run, agreed that the military coup was proceeding successfully.

In the same context, while events were still ongoing in Turkey towards the end of the coup, Al-Youm Al-Sabaa newspaper highlighted the reasons that had led to the ouster of Erdoğan, without casting a shadow on the fact that the coup attempt was failing.

Among the reasons mentioned for the military uprising in Al-Youm Al-Sabaa was the hostility adopted by Erdoğan towards the 30 June Uprising in Egypt.

Media expert Yasser Abdel Aziz previously asserted that the absence of objectivity and ethics in Egyptian media is a disaster that will force Egyptians to resort to other regional and international media outlets “that work to destroy Egypt”, Yasser said.

Egyptian media, whether private- or state-owned, suffers from political and security pressures that control its content, the expert added.