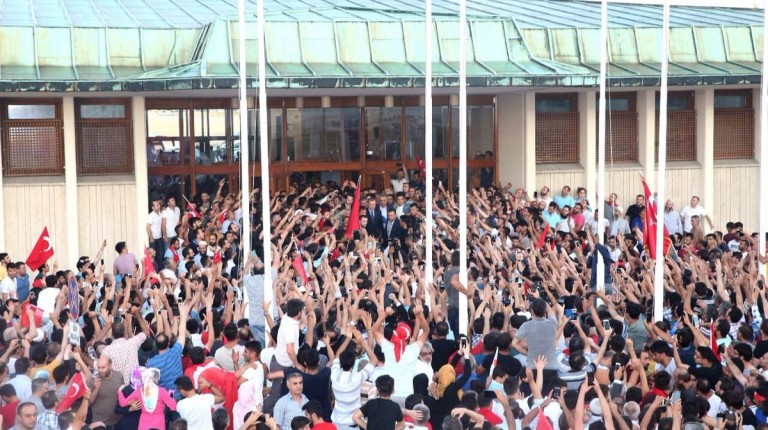 After a night of remarkable events in Turkey, a military coup attempt has been thwarted as the government of President Recep Tayyip Erdogan has taken back control over the country.

An emergency session for the Turkish parliament was held Saturday afternoon with pro-government supporter’s surrounding the headquarters with chants against the coup attempt and an inside of the building marred by last night’s destruction.

The extraordinary session was held less than 24 hours after elements of the Turkish military had taken control of major institutions in the Turkish capital of Ankara, including the army general staff headquarters, state TV headquarters, and the city’s main airport.

Military jets were flying at low altitude over the capital. Early on, a statement from Turkish prime minister Binali Yildirim said a “small group” from the army attempted to stage a coup and gain control of the country.

The prime minister’s statement was followed by a statement aired on state TV that the army has assumed power over the country to protect the democratic order and maintain human rights.

This claim didn’t last long as the events unfolded. The escalation of events was very rapid, and within 8 hours the situation changed from 17 police officers killed at Ankara’s special forces headquarters to hundreds of coup-plotters being arrested and surrendering their weapons.

While there are still some pockets of unrest in Ankara, the situation is nearing its end. However the night of 15 July will be likely remembered for reshaping Turkey’s internal policies.

Erdogan and officials from his government have, both directly and indirectly, pointed fingers at Fethullah Gulen, an Islamic cleric and a dissident of Erdogan’s regime who has lived in self-imposed exile in the United States since 1999, for being behind the coup attempt.

A “witch hunt” targeting “Gulen insiders within the army” may go too far “to the extent that some innocent individuals may also be punished. In that process there might be some violations of human rights,” international relations professor at Marmara University Ramazan Gozen told Daily News Egypt.

Currently, thousands of officers and military students are being rounded up and will possibly face trial for alleged involvement in the coup plot.

“Starting from now, several dismissal orders for military officials and judges will be decided,” Khaled Karizim a political researcher based in Turkey told Daily News Egypt.

Already authorities in Turkey removed 2,745 judges from duty following the attempted coup, reported broadcaster NTV, citing a decision by the High Council of Judges and Prosecutors (HSYK). Also more than 1,500 army personnel have been arrested across the country.

Almost all opposition parties have condemned the coup attempt in its first hours, a highlight of Friday night’s event, which will also prompt Erdogan to reconsider his policies from the inside.