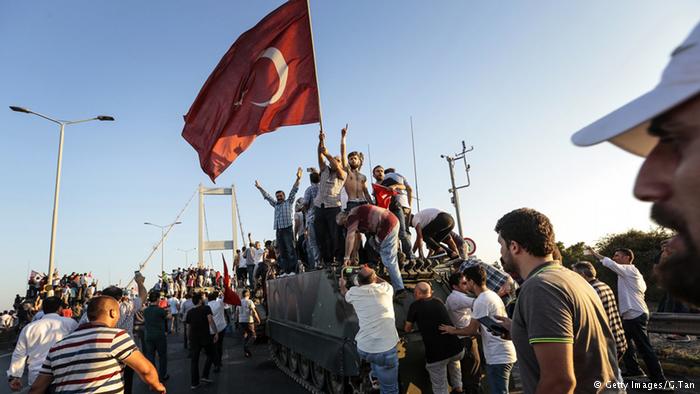 Turkey has experienced many military coups but the latest, overnight attempt was different says DW’s Seda Sertar.
The whole country was up all night trying to understand what was happening. The government announced that the military coup attempt had failed in the early morning, however the future is still uncertain. This is not a regular military coup that the Turkish people have experienced multiple times in the past. This time, a group within the military tried to overthrow the government. Even though the government is openly pointing fingers at the Gulen Movement, President Erdogan’s rival and a declared terrorist organization, it is unclear who is behind the coup initiative.

Turkey has experienced multiple military coups in the past. In the 1980s following deadly clashes between left and right wing activists, the military took over. All previous coups were the initiative of the whole military. This however, involves a smaller group.

More than 1,500 military personnel have been arrested so far and throughout the night there were clashes between this military group and the Turkish police. But who was behind it? There are many unanswered questions. We see once again that there are certain groups within Turkey that are harmful to the countries’ democracy and stability. It is scary that over night the country can be turned into a war zone, bombs falling on parliament and fighter jets roaming the skies above Ankara.

The world cannot afford to have an unstable Turkey, pulled into chaos while it is fighting terror and trying to eliminate the so-called “Islamic State” (IS) group. Turkey needs stability more than ever before. This coup attempt shows clearly that Turkey is in a very fragile state. It has been facing terror attacks continuously over recent years but being dragged into a civil war is another level of threat; one which the government needs to take extremely seriously.

In August, the Supreme Military Court was getting ready to expel military servicemen said to be affiliated to the Gulen Movement. Is this coup attempt connected to that? It is too early to say.

In this horror scenario only one thing is clear. The next steps will be extremely crucial for Turkey. Will this be used for political maneuvers? After every terrorist attack the ruling Justice and Development Party came out stronger. However, this time, the world is watching much more closely and all leaders are supporting President Erdogan with the emphasis on protecting democracy. Empowering democracy has to be the first goal as soon as this nightmare is over.

Attempted coup in Turkey ‘will lead to a witch hunt’