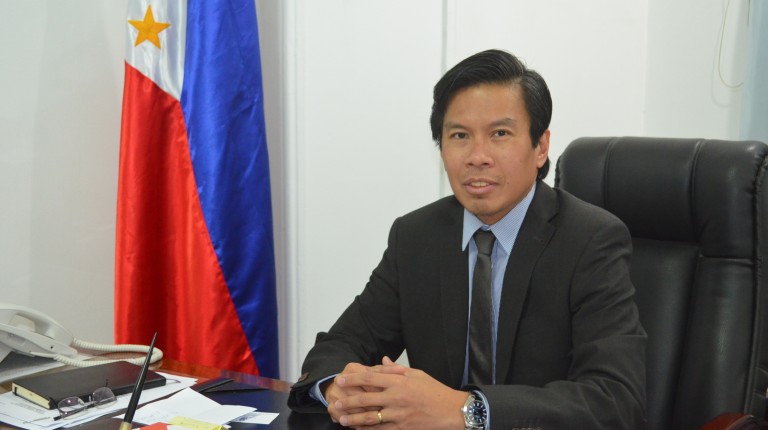 The Philippines is expected to be the sixth-fastest growing economy in the world, according to the British Knight Frank consultancy and a Citi Private Bank report in 2012. Ever since 2010, the country has been undergoing multi-sectoral reforms. This year, the Philippines is celebrating 70 years of relations with Egypt, along with its 118th anniversary of independence.

In May 2014, the Federation of Egyptian Chambers of Commerce signed a Memorandum of Understanding (MoU) on trade cooperation with the Philippine Chamber of Commerce and Industry. This followed an MoU on tourism cooperation and a visa waiver agreement for holders of diplomatic passports between the foreign ministers of both countries.

In an interview with Daily News Egypt, the Philippines ambassador to Egypt, Leslie J. Baja, discussed the volume of bilateral trade between the Philippines and Egypt and the economic ties between the two nations. Baja spoke about how he imagines the future of the ties between his country and Egypt, especially in regards to the promising economic prospects that await the two countries.

Can you outline the bilateral trade volume between Egypt and the Philippines?

As far as we know, the bilateral trade volume has been decreasing since 2011 as figures went from around $100m in 2011 to $17m in 2014. I believe that the trade was cut down after the 25 January Revolution and the 30 June Uprising as a result of anxiety regarding economic stability. However, we have been trying to inform our business community and our traders that there are a lot of promising prospects here. We advised them not to view Egypt as just a bilateral trading partner, but to look beyond that. Egypt can be the Philippines’ gateway to Africa.

An MoU was signed in 2014 between the Federation of Egyptian Chambers of Commerce (FEDCOC) and their Filipino counterpart. One of the objectives of the MoU is to establish a business council in order to set up an institutional framework to boost trade and increase the awareness of both Filipino and Egyptian businessmen.

Egypt, with its population of 90 million, is a huge market for the selling of products. Given the increasing stability in the last two years, I think it’s about time to start looking at Egypt as a viable market for our products again.

There is more to the Philippines; it is a member of the Association of Southeast Asian Nations (ASEAN), a political and economic organisation made up of ten Southeast Asian countries. ASEAN countries have a combined population of approximately 625 million people, which─as a single market─forms the world’s seventh largest economy, providing a huge opportunity for Egyptian businessmen. We are currently making them aware of the possibilities within the market.

You mentioned establishing a business council. When do you expect that to happen, and what will be its role?

Hopefully the business council will be established and fully functional by the end of this year. It is being established to lead the way in promoting trade and investments between the two countries, and to provide the necessary framework required in order to increase the two-way flow of trade traffic.

Are there currently any Filipino investments? If not are there any plans in the future?

Currently, there are no investments, but a possible cooperation in the Suez Canal Area Development Project, since both the Philippines and Egypt are maritime countries. The Philippines has a lot of experience in maritime industries, such as shipbuilding and other related downstream industries. We are looking at these possibilities. In fact, we are thinking of organising an economic seminar this September.

Can you brief us about this economic seminar?

What are the most prominent doubts that Filipino investors have, and what is needed to overcome them?

They need assurance that there are no controls on foreign exchange, and that capital can be repatriated. These are some of the concerns voiced by the private sector. The economy is part of the overall state of affairs in Egypt─what happens in one sector affects the other. I think Egypt’s economic reforms are moving in the right direction, with the president trying to attract investments to Egypt. The investment laws have improved throughout the years, but I am also sure that there is always room for improvement as far as investment laws go.

What other possibilities do you see regarding economic cooperation?

In the field of agriculture, we can do a lot. Both countries have very strong agriculture sectors. I believe we can cooperate in agricultural research in addition to the maritime industries. This is something I discussed with the General Authority for Investment and Free Zones (GAFI) a few months ago.

How can we improve Filipino tourism to Egypt?

We have been trying to promote tourism in Egypt and motivate Filipinos by framing Egypt as a historical and religious destination, emphasising to the majority Christian Filipinos the religious landmarks and monuments in Egypt.

Economy, tourism, and culture are all related, and personal contact between people is crucial. When people tell each other that Egypt is a safe place to visit, others will follow. To ensure that, a Filipino music and dance group will perform at the Sayed Darwish Theatre next week, celebrating 70 years of relations between Egypt and the Philippines. This is taking place in collaboration with the Ministry of Culture. An Egyptian music and dance group will go to the Philippines as well.

What role can the embassy play to strengthen economic ties?

After initiating the government to government interaction and once the business council is established, we will leave it up to the business sector to follow our initiatives. That is when we will be able to open the door for communication in the Filipino private sector and advise the business community on regulations and ways of doing business in Egypt. This is exactly what we do when we receive inquiries from Egyptian companies.

The embassy helps smaller companies who might not have the proper awareness or knowledge of the viability of what Egypt has to offer. I believe that once we open the doors, the private sector will find their way in.

Do you think we need further trade agreements?

We are in the process of amending some bilateral trade agreements, especially on investment promotion and protection. I think that the role of the government will be to improve the business environment between our two countries. After that we might be able to further promote a healthier environment that will be a great attraction for the business community.

Moreover, we would like to see more direct flights between Cairo and Manila. Currently, there are no Asian airlines flying from Cairo to ASEAN. They are mostly Gulf and other Middle Eastern airlines. EgyptAir only flies to Bangkok. We are trying to negotiate on that, but it is still a work in progress.

Looking inside the mind of Philippines’ Duterte

Duterte’s move is ‘a massive affront against the US’

Cloud rats of the sky islands: 28 new mammal species found in the Philippines

We should work together to fight terrorism: Russian PM

Egypt builds upon its outsourcing growth