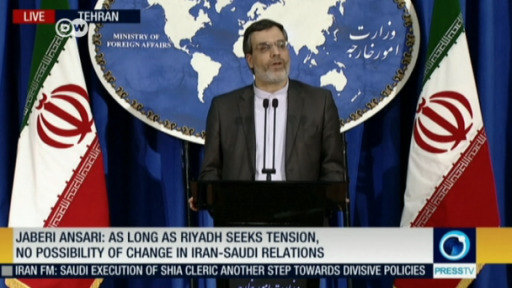 Iranian protesters accused of storming the embassy of Saudi Arabia have attended their first hearing before a Tehran court. Forty-eight people, including four clerics, face charges over the January incident.
The defendants face charges of “disturbing the public order and damaging embassy buildings,” state media reported on Monday.

According to Iran’s judiciary, prosecutors charged 48 people with ransacking the Saudi embassy in Tehran and a consulate in the second-largest city of Mashhad in January this year. Both buildings were set on fire.

The unrest was sparked when the Saudi kingdom executed Shiite cleric Nimr al-Nimr after being convicted of terrorism offenses. The move sparked international outrage and strong protests from Iraq and Iran, with the Shiite-majority Iran saying that the charges were politically and religiously motivated.

Soon after the execution, angry mobs attacked Saudi diplomatic posts in the Shiite country. Many observers accused parts of the Iranian state of secretly condoning the violence. In response, Riyadh cut diplomatic ties with its Tehran rivals and pressured several of its Arab allies into doing the same.

Iran officially condemned the unrest, with Ayatollah Ali Khamenei saying it had “damaged” Iran and Islam.

During Monday’s hearing, one of the nine defendants present said he “didn’t know the protest did not have a permit.”

“I am regretful as I broke the heart of the Supreme Leader (Khamenei),” the 25-year old said, according to ISNA news agency.

He also said he had learned about the protest from social media groups “said to be linked to the Revolutionary Guards,” the agency reported.

Iran’s Revolutionary Guard is a powerful military force that reports directly to the supreme ayatollah. However, some of the corps’ commanders decried the embassy attack as a plot against Iran and suggested “foreign agents” to be behind it.

Another defendant said he was driving to a pharmacy past the angry crowd, and only stopped the car to watch the burning of the embassy, before being arrested.

Out of 48 people facing charges, four are clerics. All of them had been released on bail ahead of the trial.

Iran has a history of mobs attacking foreign embassies. Protesters famously attacked the US’ diplomatic post in 1979, the Kuwaiti and Saudi embassies in the 1980s, Denmark’s in 2006 and the UK’s in 2011. Each incident prompted diplomatic crises and, in most cases, a cutting of ties. None of the assailants have been convicted.

Moderate president Hassan Rouhani urged the courts to take action at a judiciary gathering in June.

“Every country is responsible for the security of its foreign embassies,” he said.

“People want to know how a bunch of rogue individuals who attacked a foreign embassy in breach of the law and against the country’s public security… will be dealt with,” Rouhani added.