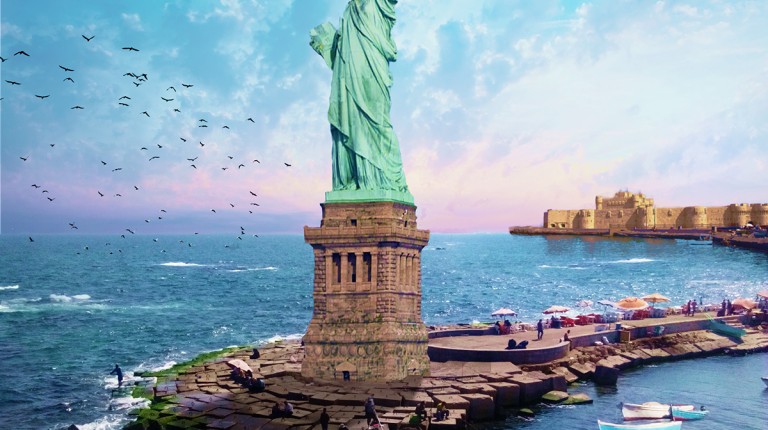 Just one step inside the small narrow apartment which has a view over the timeworn streets of downtown Cairo feels like an invasion into a different world where time is measured by the moments people spend with their beloved ones and where people’s souls seem to materialise.

The walls of the exhibition Tager El-Basata (“The Trader of Simplicity”) portray the story of a young man who once dreamed of touching the heart of every person on earth. However, he died before he was able to witness his dream come true.

Along the walls of Mohammed Mahmoud Street are a series of paintings of the youth who died during the 25 January Revolution or in the aftermath.  Hesham Rizk, 20, was a student at the faculty of arts and is one the street’s main graffiti artists.

In July 2014, Rizk went missing for 11 days before his body was found in the Nile, with no indications as to what had happened before his death or whether he was killed or committed suicide. Known for his revolutionary thoughts and his dream of touching people’s hearts and lives, Rizk’s friends “celebrated” his second anniversary of his death in an unusually celebratory way.

The goal of this exhibition is for Rizk’s friends to introduce the deceased artist to people who hadn’t had the chance to meet him before, as well as to achieve his life-long dream of holding an exhibition that combines different types of art.

Tager El-Basata features paintings and artwork by Rizk, the graffiti he drew throughout the revolution, and photos of him performing a pantomime. Although the government had demolished much of the walls—and therefore the graffiti—on Mohammed Mahmoud Street, Rizk’s friends managed to collect several pieces of blocks with Rizk’s graffiti on them and were able to show this at the exhibition.

At the event, Rizk’s pantomime partner did a performance of the show they had performed together for years, only this time Rizk was not there to support his friend and perform with him.

The exhibition displays photos of the late artist throughout his life, starting from his childhood, teenage years, memories he shared with his friends, memories from the revolution, for which he was fierce advocate and had drawn a great deal of graffiti about around Tahrir Square and Mohammed Mahmoud Street.

“This exhibition is Hesham’s life-long dream,” said Ahmed El-Sheikh, one of the organisers. “His ultimate goal as an artist was to organise an exhibition in the street to introduce all kinds of art to as many people as possible from all social classes.”

Rizk’s friends drew the story of his life in graffiti, each presenting a facet of his character. The graffiti also included a map of his last-known movements before he went missing in downtown, along with his date of birth, death and days on which important events had happened in his life.

The exhibition also showed a short documentary about Rizk’s perspectives on life, through his parents’ eyes and those who knew him well.

“This is not only a mark of our late friend’s life, it is a mark of all the ethics he followed and taught us,” said Amir, one of Rizk’s friends.

Even though he died at a young age, he had already established himself as a very ascetic person. He never felt ashamed of belonging to a lower social class despite Egypt’s often classist and prejudiced society. It actually led to him reading more about Marxism, labour rights and communism, according to his friends.

Many of those who helped organise the event did not know Rizk personally, but were encouraged by seeing his friends’ loyalty to the artist.

“I did not have the chance to know him on a personal level, even though I walked past his graffiti on Mohammed Mahmoud Street so many times. Yet, when I heard stories about him from our mutual friends it felt like I had known him for years. I can surely say now that Hesham is a true friend of mine, even though we had not met before,” El-Sheikh added.

“Each corner in this exhibition reflects a part of Rizk’s personality, starting with his artwork, what he spent his time thinking about, the photos with him and his friends, and the documentary that allows Hesham to speak through us,” El-Sheikh added.

“This is not only an exhibition about Hesham’s life … I feel like this is his wedding,” said Yousereya Mousa, Rizk’s mother.

“At first I believed I only had one son, but after seeing all of this work … it has brought Hesham back to life. I can see Hesham clearly in each of his friend’s eyes. He is sitting in every corner of this place smiling widely and happy to have achieved what he always dreamed of doing,” she added.

It took months of work to prepare for the three-day exhibition, which was entirely self-funded. “We were offered funding from several organisations, yet we all agreed that we wanted to fund this exhibition ourselves. We want to tell people that though this artist died, his work is still alive,” El-Sheikh explained.

Despite the fact that he was a political activist, Rizk’s political actions were not the focal point of the exhibition, rather it was the effect he had on other people’s lives. “We never treat him as a dead person—his body may have gone, but we know that his soul is here,” he concluded.