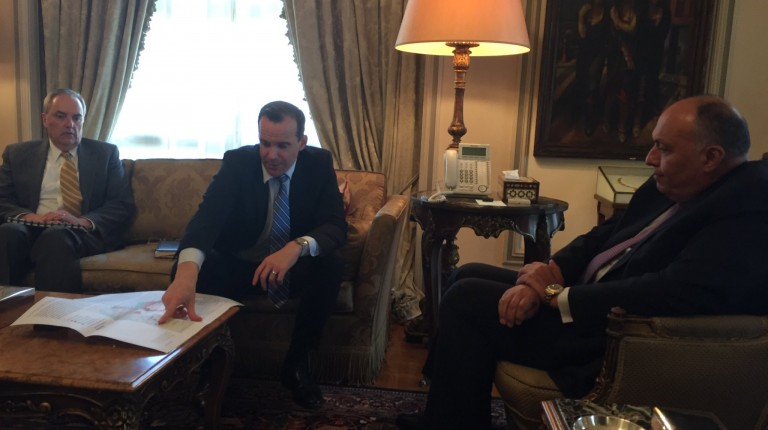 Egyptian Foreign Minister Sameh Shoukry travelled to Washington on Tuesday to attend a ministerial conference for the international coalition to combat the Islamic State (IS), according to a statement released by the Foreign Ministry.

Citing Foreign Ministry spokesperson Ahmed Abou Zaid, the statement said that the foreign ministers of about 43 states, along with a number of defence ministers, will participate in this conference. During the visit on Thursday, Shoukry will participate in a quadrilateral meeting to discuss the development of the Palestinian situation. He will further hold a bilateral meeting with the US secretary of state to discuss the situation in Syria, Iraq, and Libya.

The delicacy of Libya’s situation

Egypt is supporting the right of Libya’s legitimate interim government to obtain arms to fight the terrorist groups whose presence has significantly increased over the past few years, particularly after the downfall of Muammar Gaddafi’s regime. On the other hand, earlier in June the United Nations Security Council (UNSC) allowed for ships off the Libyan coast to be inspected for arms, alarmed by the increase of arms being smuggled into the oil-rich country. The US also expressed several concerns regarding exporting arms to Libya because they might reach the “wrong hands”.

The Government of National Accord (GNA) in Libya is barely holding control over Tripoli, while militants are taking over several parts of the country. While the government is assumed to be backed by the commander of the Libyan armed forces Khalifa Haftar, the latter is raising international concerns for his solo acts in combating terrorism. Haftar has major power in Cyrenaica, the eastern coastal region of Libya.

Haftar is internationally considered to be a potential threat to the current government because if he does not support the government, he may bring about a civil war.

Shoukry and Kerry will have a bilateral meeting that will bring two different perspectives on Libya’s situation to the table. From the US perspective, Egypt is expected to impose tighter control on its western borders with Libya to hinder any arms being smuggled to the country.

The foreign ministry reiterated warnings against travelling to Libya amid security tensions and repeated arrests of Egyptians in the neighbouring country.

The ministry urged Egyptians to take maximum precautions and to stay away from areas of tension and clashes, according to a statement on Wednesday.

According to the ministry, smugglers promote Libya as a “middleman” through which illegal workers are smuggled en route to a host country. This transport exposes these individuals to arrest by Libyan authorities.

Last week, a group of eight Egyptians were feared kidnapped in the Libyan city of Misrata before the Egyptian government could verify they were detained by local authorities.

Abou Bakr Baeera, a member in the national dialogue commission in the Libyan parliament told Daily News Egypt that he does not expect these talks to result in a fruitful decision made in Libya’s favour . However, he said that Egypt’s stance in supporting Libya should be clear.

“The United States is supporting what the militants are doing in Libya, this is why there is obvious arbitrariness in providing arms to Libya,” Baeera said.

Baeera concluded by saying that the international community should support Libya’s efforts to combat terrorism because these attacks have already filtered down to reach them, pointing to the several attacks that took place recently in the US, France, and Germany.

Haftar visited Cairo earlier this month. Official sources said that the Libyan situation was discussed. A Libyan analyst said in a press statement that this visit was a blow to the international political agreements that are not supporting Haftar.

How far is Germany from a complete coal exit?

US launches first airstrikes against ‘IS’ in Libya