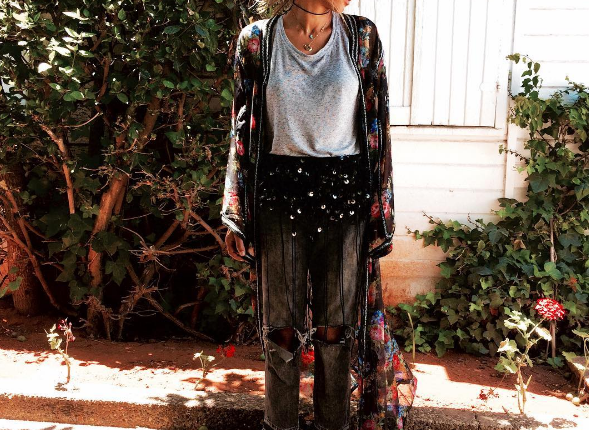 It is safe to claim that a large share of the world’s population dreams of spending a vacation in enchanting Morocco. The North-African country has some of the world’s most attractive monuments and natural destinations. However, the true beauty of the country is captured in the subconscious of the masses through a rainbow of patterns displayed in architecture and fashion.

Bakchic is one of the country’s lead brands that has showcased traditional garments and styles through adding a much-needed modern twist. The label’s captivating kaftans and embroidered dresses highlight the beauty of Moroccan traditional garments while staying true to the decade’s fashion aesthetic.

Sofia El-Arabi is the creative mind behind the world-acknowledged brand that has been praised by various respectable fashion publications including Vogue US.

Daily News Egypt talked with the Moroccan designer to discuss similarities between Egyptian and Moroccan fashion, highlighting the importance of capitalising on ethnic and traditional garments in order to build truly international labels.

What is the main concept behind Bakchic?

Bakchic is all about mixing Arab and Western cultures. It is the story of a whole nation. We speak French, English, and Arabic in the same sentence, salivate over both French cheeses and Moroccan couscous at the same table, and wear blue jeans under traditional Jellabas to Friday prayers at the mosque. It is not something I can put into words. It is a whole world that should be experienced rather than merely discussed.

What are the main elements of Moroccan heritage that could inspire a modern garment?

Embroidery is my second mother. She follows me everywhere, harassing each piece of my collection, but she is never too dominant.

In the same family, there are her siblings: aakad–traditional Moroccan buttons made of a special fabric—and sfifa—golden fibres that adorn dresses along their entire length.

Kimonos have managed to become a global trend, what do kaftans require to follow the same lead?

The main goal of Bakchic is to make all kinds of traditional clothing that are treasures of Morocco and the Arab world a daily casual wardrobe choice rather than something reserved for special events and occasions.

The true challenge is, of course, to conserve their delicacy. I think a part of the secret is to discharge kaftans from their over-the-top ornaments and only concentrate this ancestral know-how on the important details.

How can fashion be used to reshape mistaken stereotypes regarding the Middle East?

First, fashion enables a foreign audience to understand that Arab, African, and Middle Eastern countries and the rest of the world are related by very rich and diverse cultural bonds.

It is also a peaceful and effective way to transmit messages with which political news cannot compete because they are out of the communication itinerary, powered by the natural importance of clothes.

How does the local market’s tendency to support western fashion affect starting a brand, such as yours, on both financial and creative levels?

It is all new in Morocco. It is up to you to struggle in order to create a real community that shares and supports the main values behind Bakchic. Simultaneously, it is the designer’s task to convince the market on the sustainability of this type of initiative. However, it feels extremely fulfilling to be a pioneer in your own way.

Based on your online orders, which countries support your brand the most?

Kuwait, the UAE, the US, France, Spain, and Morocco are the countries with which I have the most interactions.

How did the international rise of ethnic fashion and statement accessory reflect on your brand locally and internationally?

It truly gives a common voice to unique ethnic cultures as opposed to mass culture, which does not separate voices. The real trap for these cultures is that they tend to melt into another common ethnic category, which does not draw any concrete lines between various cultures. Unfortunately, this hybrid culture seems to be the current trend.

I really pay attention and invest tremendous energy in order to not let my Moroccan inspirations disappear in the vortex of a general idea of ethnic brands that is usually captured through colourful Eastern fabrics that only shine and glitter.

What is next for Bakchic?

I am currently working on both a home and a beauty line as Bakchic is a real lifestyle to me. I want to create and share a Bakchic element for each step and place of a person’s daily journey.