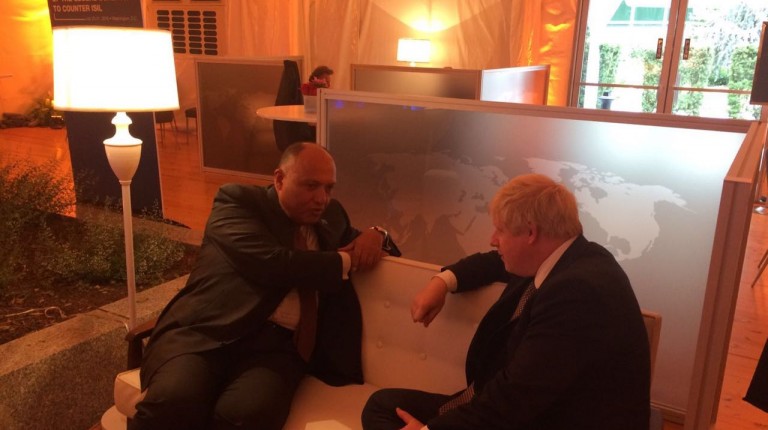 Egypt’s Minister of Foreign Affairs Sameh Shoukry met several of his counterparts on Thursday, on the sidelines of the international coalition against Islamic State (IS) ministerial meeting in Washington, according to spokesperson Ahmed Abou Zaid.

Shoukry started off with meeting his British counterpart Boris Johnson, congratulating him for his new position. The duo discussed bilateral relations between Egypt and Britain, as well as the Libyan and Syrian crises developments.

Shoukry’s meeting with his Norwegian counterpart revolved around regional and international efforts to push the peace process between Israel and Palestine forward, as Shoukry reviewed details and results of his visit to Ramallah and Israel.

He also reviewed Egypt’s efforts to encourage the Palestinian and Israeli sides to resume negotiations and highlighted the importance of Syrian talks—topics he also discussed with his counterpart from the Netherlands.

Shoukry arrived in Washington on Thursday evening to participate in the coalition quartet meeting, and held a bilateral meeting with Kerry at the headquarters of the US state department.

Both officials addressed ways to strengthen bilateral relations, discussed regional issues, specifically Syria and Libya, and expressed support for the Palestinian cause.

The US expressed its desire to support the economic development program adopted by Egypt, and discussed the latter’s current economic challenges.

Shoukry will head to Mauritania’s capital Nouakchott to attend the Arab League summit that will start on 23 July.