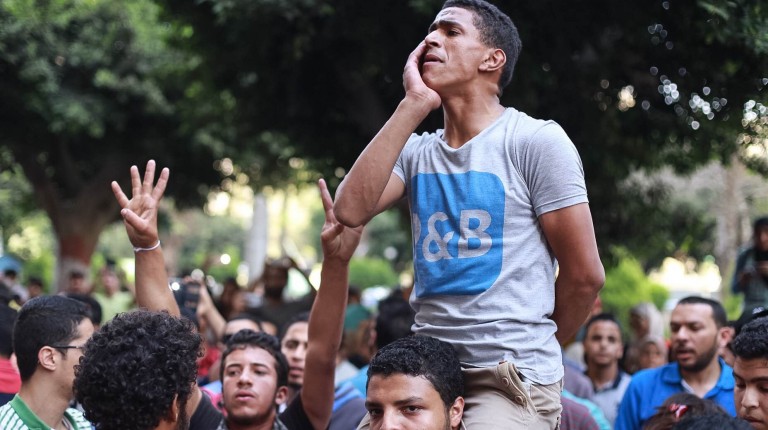 The Front to Defend Freedoms, which includes political parties that form the Democratic Current coalition and NGOs, launched a campaign in solidarity with political prisoners detained against the backdrop of the controversial Red Sea islands issue. The campaign is titled “Solidarity with Detainees of the Land”.

The campaign aims to shed light on the detention conditions of several young activists, who had engaged in protests calling for the annulment of the Egyptian-Saudi maritime border demarcation agreement signed on 8 April. The detention of the activists continued despite a preliminary verdict by the State Council nullifying the contract on 21 June.

Several activities are due to take place between Sunday and Thursday, the first of which will be hosted by the Egyptian Social Democratic Party (ESDP) in solidarity with prominent rights lawyer Malek Adly. Adly has reportedly suffered under inhumane conditions in prison, having been detained in solitary confinement for nearly two months, according to his wife and lawyers.

Human rights defenders have demanded an end to Adly’s solitary detention and the application of prison regulations in accordance with the law. Meanwhile, ESDP also claimed that some of its members were under pressure by authorities, including being sentenced in court cases related to protests that took place in April, during which demonstrators chanted: “Tiran, Sanafir are Egyptian”.

Al-Karama Party will also host an event on Tuesday in solidarity with detained journalists Amr Badr and Mahmoud El-Saqa, who were arrested on 1 May after, for the first time in history, the police stormed the Press Syndicate. The escalation of incidents led to syndicate leaders facing trial, to the outrage of the press community.

As for Al-Karama, the party was also subject to restriction by a police cordon for several hours on 25 April, being located in the heart of Dokki where Red Sea island demonstrations were held.

On Wednesday, the Revolutionary Socialists will hold a conference for their detained members Haitham Mohamadeen and Zizo Abdo.

On Thursday, the Socialist Popular Alliance Party (SPAP) will also support the detainees, many of whom were arrested from home, or public places prior to protests in a nationwide security raid.

On Friday, Al-Dostour Party (DP) will discuss the case of detained member Hamdy Qeshta, who has reported being subject to physical abuse in the Boulaq police station.

The Democratic Current coalition has been critical the state’s crackdown on political and civil freedoms. Along with human rights NGOs, they have been trying to confront a number of issues, including police violence, increased detention and trials of political dissidents, deteriorated prison conditions, the right to peaceful protest, and the end to the imprisonment of journalists, intellectuals, and researchers.