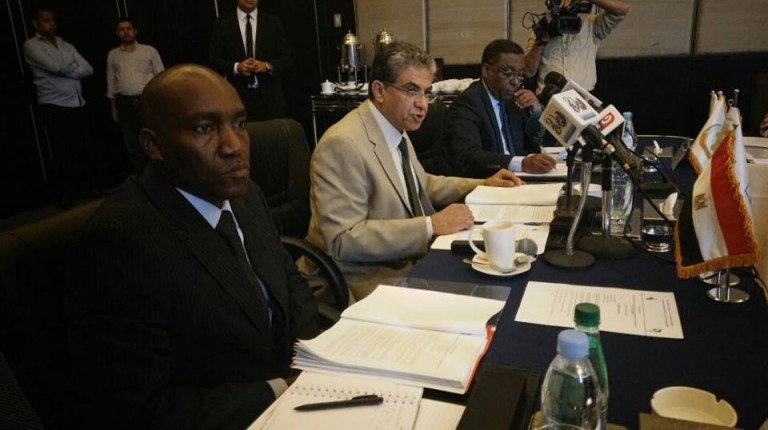 Minister of Environment Khaled Fahmy held a meeting with his counterparts from Gabon, Niger, and Namibia on Sunday in Cairo, in his capacity as the president of the African Ministers Conference on the Environment (AMCEN).

The meeting discussed preparations for the upcoming Conference of the Parties on climate change (COP22) in Marrakesh, Morocco in mid-November, the ministry said in an official statement.

Fahmy said during the meeting that the assembly aims to outline the African countries’ stances and come to a common ground and vision regarding the agreement reached in Paris last December during the previous COP.

“The environmental challenges faced by Africa require collaborative work between its countries and for common goals to be reached that serve sustainable development across different fields,” Fahmy said during the meeting.

In the next COP, countries will start discussing mechanisms, tools, and partnerships towards reaching the goals of the Paris agreement. In mid-December 2015, representatives of nearly 170 countries reached a binding agreement that set ambitious goals to limit temperature rise well below 2 degrees by 2100, and to hold governments accountable for reaching this target.

Egypt hosted the AMCEN for the second year in a row in late April. African leaders from all 54 countries reached a common understanding of promoting sustainable development.

This is the second meeting to discuss preparations ahead of COP22, following one that was held on 25 June in Marrakesh. During that meeting, Fahmy once again highlighted Africa’s vulnerable status regarding global climate changes despite contributing the least amount of greenhouse gas emissions.

Egypt, meanwhile, is leading the Africa Renewable Energy Initiative (AREI) across Africa. The initiative would have a considerable impact on the reduction of greenhouse gas emissions on the continent. It will, however, require huge funding in order to be activated, according to the United Nations Framework Convention on Climate Change (UNFCC).

“At least $5bn in public and highly concessional financing, between 2016 and 2020, from bilateral, multilateral, and other sources, including the Green Climate Fund, will be needed to leverage a further $15bn in other investments, for a total investment of at least $20bn pre-2020,” the initiative statement read.